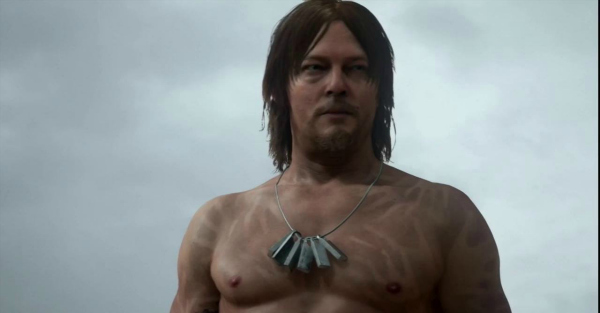 Hideo Kojima, Death Stranding, Guillermo Del Toro, Mads Mikkelsen, Norman Reedus, Twitter, Tweets, News, Game, TrailerWhen the first trailer for Hideo Kojima?s newest project, Death Stranding, was released last year during E3, the collective enthusiasm displayed by the crowd would have nonplussed anyone unfamiliar with the video game industry. Kojima had recently been let go by Konami in a decision that was met by fierce criticism and hostility by many, both for the shady manner in which the studio went about it and for the love many held for the iconic developer?s earlier games. Kojima could have released a trailer for an in-depth fishing simulator and his audience probably would have cheered either way.

That said, Death Stranding looks to have substantially more going on for it than most fishing sims. If you haven?t already seen it, the trailer is well worth checking out:

Hideo Kojima is most well-known for the Metal Gear franchise, the final ?faithful? installment of which released in 2015. By the look of the above trailer, the Death Stranding IP is expected to follow similar themes in terms of the franchise?s unusual storytelling. Unfortunately for fans, there?s been little news released on the title since its initial announcement beyond the fact that it will star Norman Reedus (The Walking Dead), Guillermo Del Toro (Pacific Rim, Hellboy), and Mads Mikkelsen (Hannibal, Casino Royale). All other possible tidbits, including gameplay and screenshots, have been held under firm lock and key ? until today, anyway.

While not exactly your traditional leak, Hideo Kojima?s recent comments over Twitter have provided some level of insight into the development process so far.

Game creation is different from film making. Let’s say we imagine “a hallway the player is meant to walk down according to the game design.

We?ve gone ahead and compiled the full sum of messages below:

Game Creation is different from film making. Let?s say we imagine ?a hallway the player is meant to walk down according to the game design. The hallway has meaning in the plot as well as the game design. Is the purpose to deliver the story, to practice the controls, to show the scenery, or to add rhythm to the game play?

A variety of possibilities exist. As the game development proceeds, the details need to be fleshed out. How about the lighting? How does the player feel at this moment in the game? What kind of music/sound should be used? Everyday we carefully test these details and refine them until they are clear. At the same time, there is a never ending stream of revisions based on the plot, gameplay, the map layout, as well as dealing with technical hurdles.

There are other various process details to consider, like adding a crank turn to the hallway, is it possible to add NPCs, how to fix poor gameplay tempo, making the characters stand out, or even whether to show the ceiling in cutscenes.

Almost everyday revisions are made depending on the point in the game development process. An action game can never be completed by ordering from a blueprint and assembling parts off a factory line. If decision making and supervision are delayed, production efficiency drops, and that leads to redoing work.

In order to avoid this trap, one must make daily adjustments on site while creating the game. When everything is outsourced, the parts that come back just don?t fit together. That is why it?s important to take charge of the little details everyday.

The feeling of gameplay in a single hallway, the concept, the visuals, the controls, the story hints, the map, the sound, the directions, all those are important to the overall game. Scripts and gimmicks change everyday. That is what it means to make games, a process completely different from the concept -> script -> game design -> preproduction -> shooting -> postproduction process of the film.

The entire, one-sided exchange reads exactly as how one would expect Kojima to handle video game development. There?s no formula to the process, no perfect blueprint that outlines every step of the way. Each sequence undergoes extensive consideration before being hammered into a playable segment of the game, and even then it will probably undergo further revision before the final product ever sees the light of day.

If nothing else, Kojima?s inadvertently offered a full explanation as to why his projects often take quite a bit longer than similar entries into the video game market. With such an extreme attention to detail, we can expect Death Stranding to take anywhere from an additional 2-3 years of development ? and if that means an IP on the same level of quality as the Metal Gear franchise, then maybe it?s worth it.