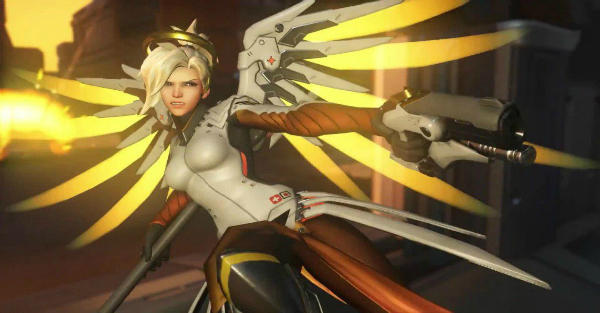 In Overwatch competitive play, the hero Mercy has always been a mixed blessing. Thematically, she’s a very well-designed character; everything she does – from quickly flying in to save a teammate to using her powerful ultimate to revive her entire team – matches well with her “guardian angel” shtick. She’s also a very satisfying character to play, especially if your interests lie outside trying to kill the enemy team. There’s something oddly rewarding about both watching an ally’s health return from the brink of death and boosting another one’s damage enough to grab a last minute victory.

Unfortunately, there’s always been one major problem with Mercy’s design. Her exceptionally powerful ultimate ability “Resurrect” has for a long time now encouraged Mercy players to actively avoid key battles only to fly out and revive their entire team at the enemy’s expense. Imagine successfully scoring a hard-fought victory only for all of the enemy players to suddenly be brought back by a hiding Mercy. It rewards passive gameplay and forces teams to have to win twice before making progress on the objective, and Blizzard’s latest PTR update aims to fix that.

According to the developer patch notes, Mercy’s old Resurrect ability has now been replaced by something called “Valkyrie.”

Other changes include the shift of Resurrect from her primary ultimate to a secondary, single-target ability with a 30-second cooldown, 5 meter range, and a return of her vulnerability while resurrecting. As you can see from the above notes, this cooldown is significantly reduced during Valkyrie and can allow Mercy to bring back multiple players in quick succession.

A comment below these changes explained Blizzard’s reasoning behind the decision:

“While resurrecting downed allies is a core part of Mercy’s gameplay, the way her Ultimate functioned was causing a number of problems. It was frustrating to play against, and it incentivized Mercy players to hide away from important battles, instead of taking part in them. This version turns Resurrect into a single target ability. It’s still an important part of Mercy’s kit, but it plays much better for both Mercy players and her enemies. Valkyrie, her new Ultimate, gives her the opportunity to make big game-making players and opens a number of new options for her.”

As is usually the case with wide, sweeping changes, Mercy’s recent overhaul has left her in a bit of an overpowered state. The Overwatch subreddit has already been flooded with multiple clips of Mercy wiping enemy teams and even circumventing other hero’s crowd-control effects – though this last one is almost certainly a bug. These reactions prompted a follow-up response on the Overwatch forums, in which a developer commented:

“Her gun while using Valkyrie is a bit too strong at the moment. The idea is for it to have some extra juice to be able to use it in more niche situations. Right now, it is strong enough that it is feeling like the primary way to use the ultimate, which isn’t intended. There is likely to be a good amount of tuning happening throughout this PTR cycle to iron this kind of stuff out.”

We can definitely expect further changes to be made to Mercy over the next couple of weeks as Blizzard attempts to fine-tune the angel-themed hero. For more information, you can check out the most recent developer update from Jeff Kaplan, or jump on the Overwatch forums to follow the news yourself.