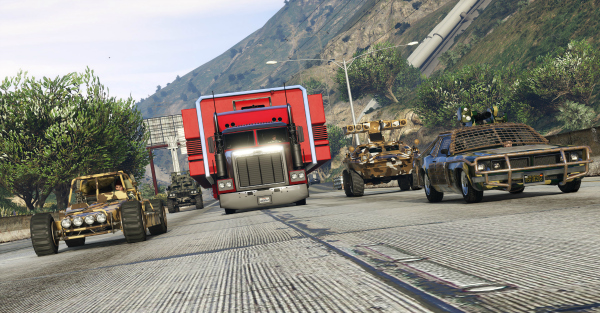 As the first installment in the Grand Theft Auto series to have a dedicated online scene, Rockstar has made it clear that it intends to get it right the first time around. GTA Online has seen numerous updates since the game’s launch that have introduced constant batches of content, including new game modes, missions, vehicles, clothing, and much more.

The latest in this series is the GTA Online: Gunrunning update, which has been teased by Rockstar for several weeks now. According to the developer blog post on the studio’s official website, Gunrunning will feature new missions that allow players to deliver weapons to their buyers in GTA Online while evading federal law enforcement and “rival dealers,” which we can only assume means other players.

Some of the most notable features in Gunrunning are:

Bunkers that players will be able to use as an underground hub for their new criminal activities. These locations will function as Mobile Command Centers (MOC) where players can modify their vehicles and weapons,  meet with their fellow gunrunners, and even use as makeshift living quarters.

Weaponized vehicles, though not an entirely new concept in GTA Online, will reach new territory in becoming a brand new class of their own. Players will now be able to create “fully amphibious, canon-toting APC[s],” and anti-aircraft trailers that should provide a fair amount of protection from enemies in the sky.

Research staff in the player’s bunker that, over time, will unlock a variety of personal upgrades for vehicles, weapons, and the MOC itself. These modifications won’t just be your basic armor and handling improvements either, if the below picture is any indication.

Stay tuned to Rockstar’s blog for any future updates related to GTA Online, or follow them on Twitter to get instant updates directly from the team.