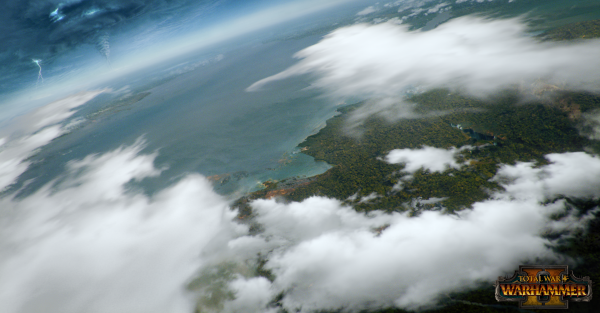 Total War: Warhammer 2 launches in just over a week, and if you’ve been following the mass of media trailers and content releases from Creative Assembly (CA), then you should already know that there’s a lot to be excited about. Four factions each with their own unique campaign mechanics, unit rosters, and quest battles await in Warhammer 2, plus an entire new world with a rich diversity of threats and challenges for players to overcome. There’s also the promise of an enormous combined campaign map in the near future that will merge the old world of the first Warhammer with the sequel, and while this has been enough for many to justify pre-ordering the game, CA has released precious little news about this highly-anticipated feature.

At least, until today. The studio broke its information embargo (sort of) on the combined campaign over Twitter with an image teasing some of Warhammer 2’s planned “Free-LC,” or free downloadable content. The partial roadmap lists three upcoming Legendary Lords, an ominously named “Experiment,” and the name of the combined map feature, which has been appropriately dubbed the “Mortal Empires Campaign.”

Additional details on this first content update in particular were provided simultaneously over the Total War blog. The Mortal Empires Campaign is set to more than double the amount of available settlements from the initial 145 of the Old World all the way up to a staggering 295, with over 117 factions to encounter, befriend, and, of course, wage total war against. Of these factions, players will have access to 25 different starting positions (provided they own all the DLC) and 35 Legendary Lords – with more on the way.

In addition to the above, the vast majority of unique features in Warhammer 2 will be included in the Mortal Empires Campaign. Excluding the Great Vortex, players will have to fend off all the rogue armies and sea monsters of the stand-alone experience, all while dealing with sea storms, shallows and reefs, and chokepoint maps. Also included are the “whacking great” UI improvements, the significantly-increased size of capital cities, universal territory capture, and the climate suitability mechanics.

Unfortunately, not all changes are an immediate plus. As expected, ending your turn will cause the game to cycle through every faction as each one maneuvers their armies and engages in diplomacy, and due to the higher number of factions this time will definitely increase. There’s simply “no way around it.” The Norsca DLC, which arrived in early August, won’t be initially available in the Mortal Empires Campaign either, and is due in a later patch.

Creative Assembly did see fit to tease some other upcoming features that didn’t make it into the previously-linked roadmap. Apparently, the Legendary Lords of the Old World – who, unlike in Warhammer 2, all share the same boring starting positions – will see alternate beginning locations added sometime in the near future. Similarly, an extremely vague comment towards the end of the post may have hinted at the eventual setting of Warhammer 3.

And a final word on the name. We know that not all the empires and characters featured in Mortal Empires are ‘mortal’ in the truest sense of the word. But compared with what may be stirring on the distant horizon…

Players have long speculated at the location of the final installment of the Total War: Warhammer trilogy. Given the limited number of factions and regions in the Fantasy Warhammer tabletop game, many have felt safe in guessing that Warhammer 2 will feature none other than the Chaos factions of the far east – an idea that the above, enigmatic comment does lend credence to.

For now, however, the combined maps of Warhammer 1 and 2 will have to be enough. Total War: Warhammer 2 launches on September 28 for the PC at $59.99. Follow the developers at Creative Assembly over Twitter, or check out the official Total War website for access to any future news, media releases, and developer updates.