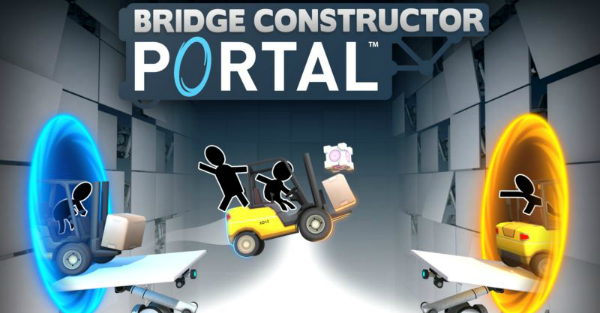 If you?re at all familiar with PC gaming, then the odds are good that you?ve at some point heard the joke, ?Valve can?t count to 3.? It?s a frequently used phrase that references Valve Software?s inability to round off any of its highly popular games with a third installment, and while it?s no less tiring to hear after the hundredth repetition or so, it?s also not without a basis in reality. Half-Life 2: Episode Two, Left 4 Dead 2, Team Fortress 2, DOTA 2 ? can you see the pattern?

Yet one of Valve?s most successful franchises just got a third title to its name, even if it?s not quite what anyone expected (or even asked for). Headup Games, the studio behind the bridge-building simulator Bridge Constructor, has partnered up with Valve Software to bring us: Bridge Constructor Portal.

The announcement arrives just over 10 years after the original launch of the puzzle-platformer Portal back in 2007, and well over 6 years after the arrival of its 2011 sequel, Portal 2. While it?s safe to say that no one expected the unusual nature of Bridge Constructor Portal, its arrival hasn?t exactly been unanticipated. Valve CEO and Co-Founder Gabe Newell hinted at a new IP set in the Portal universe earlier this year during an AMA (or ?Ask-Me-Anything?) on Reddit ? a hint that, it?s safe to say, succeeded in stirring up an unhealthy level of excitement.

Although it might be unexpected and even a little disappointing for longtime fans of the franchise, the developers over at Headup seem enthusiastic over the opportunity. In the above trailer?s description, they?ve stated that:

?Bridge Constructor Portal will blend the laws of structural engineering and technology straight from Aperture Laboratories into an exciting new game experience, all under the demanding gaze of GLaDOS.?

The studio?s previous project of a similar nature, Bridge Constructor, met with moderately positive reviews when it arrived on Steam in 2013, and later still when it launched for Android devices. The game?s review status as ?Mostly Positive? at least suggests that, while Bridge Constructor Portal won?t necessarily be what anyone asked for, it could at least stand to offer an entertaining few hours for those of us eager to revisit the Portal universe.

Bridge Constructor Portal will release on December 20, 2017 for Windows, MacOS, and Linux, as well as over Mobile devices. The Xbox One, PS4, and Nintendo Switch, meanwhile, are due for a launch in ?early 2018.?