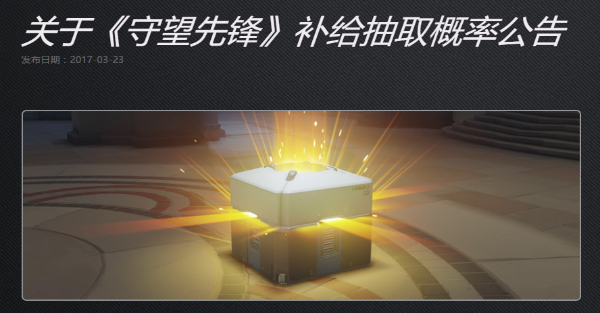 A week ago China announced new regulations surrounding video game loot crates and how the drop rate percentages are calculated. The notice revealed that China’s Ministry of Culture would soon require all video game developers to make public the probabilities behind items in loot crates. While some questioned the motivation behind this decision, it was overall regarded as a good move for gamers who previously had little to no knowledge about the gambling-esque nature of the ever popular crates.

Blizzard and Valve, both giants in the competitive gaming industry, have become the first to begin complying with the new regulations. In posts made for both first-person shooter Overwatch and multiplayer online battle arena DOTA 2, the two companies have revealed the drop rates for loot crates in the two games – for China, at least.

Because, as some have astutely pointed out, it is entirely possible for video game developers to simply alter the percentages for different countries. There’s a chance that the published information is only relevant for Chinese gamers and that completely different numbers reflect loot crate probabilities in the West.

At the moment however, there’s no sign of any sort of duplicity, so for now players can rejoice at knowing their real chances at winning an item.

For DOTA 2, Valve has revealed that, when opening crates, players have equal chances of getting all regular items. Rare treasures, while obviously less common, will become increasingly more likely to drop depending on how many crates the player has already opened. According to the official announcement, the percentages are:

Very Rare: 14% chance when 10 crates have been opened.

Extremely Rare: 3% chance when 15 crates have been opened.

Blizzard’s Overwatch, meanwhile, will reward players who open loot crates with at least one blue (rare) item. Purple (epic) items have a drop rate of about one per every five and a half crates, while orange (legendary) loot has a chance to appear every thirteen and a half crates.

It’s important to reiterate that for all we know these percentages may only apply to China, and that so far none of this is confirmed to be relevant for gamers in other countries.

If you’re interested in reading the announcements yourself, check out the official posts from both Valve and Blizzard (you will need a translator).