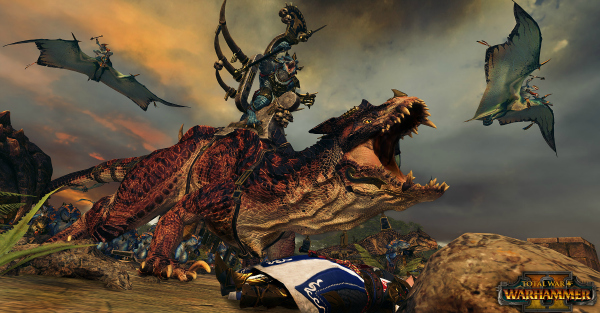 When Total War: Warhammer released last year, it was under the shadow of an unfortunate pair of controversies. Players were unwilling to forget the dismal state of Total War: Rome 2, which had disappointed the franchise’s fan base after launching as a buggy, under-developed mess made all the worse by the high levels of anticipation preceding the game. The second issue was the Chaos Warriors pre-order bonus; by excluding an entire faction (and an extremely lore-integral one at that) from the base game, Creative Assembly had committed a cardinal sin in the world of video games, and players were slow to forget this.

To the studio’s credit, it definitely seems as though CA has learned from its mistakes. While downloadable-content (DLC) will not be absent from Warhammer 2, the infamous pre-order bonus will not provide a faction as important as Chaos – in fact, it’s not even going to be in the same game!

In a blog post on the Total War website, CA’s brand director Bob Bartholomew has revealed that players who pre-order Total War: Warhammer 2 will receive a free faction in the first Warhammer.

“What we’ve done is take on board the criticism of our earlier DLCs, and Chaos Warriors in particular. The early-adopter Race Pack that we’ll reveal this week will be more along the lines of the content in Bretonnia than Chaos Warriors. So, legendary lords with unique start positions/factions, lots of new units, plus unique, flavourful and strongly differentiated Race mechanics. All of which is designed to increase the replayability and distinctiveness of the new Race.”

What this mysterious race could be is anyone’s guess, though fans on the Total War subreddit have already started speculating about the arrival of the fabled Tomb Kings.

As Bartholomew was quick to remind us, even those who decline to either pre-order or purchase the Warhammer faction will still experience the additional content as an oppositional, AI-controlled race during the campaign. There’s also the last “free-LC” to come as well, which will launch simultaneously alongside the race pack.

Another note near the bottom of the post indicated that future DLC packs will include two added legendary lords in substitution of the previously implemented mini-campaigns.

“So the biggest change we’ll be making with the first large DLC for Warhammer II is to swap out the mini campaign for two more additional Legendary Lords, for a total of 4 playable Lords in the pack. These four will each have their own factions, unique start positions, quests-chains, epic gear, benefits and playstyle… the whole nine yards. They’ll be playable in both the Eye of the Vortex campaign and the forthcoming combined campaign map, if you also own Warhammer 1.”

More news is said to be revealed later this week, so keep an eye on the Total War blog for any future updates, or follow the studio on its official Twitter account.