Winter has come to Total War, and with it a new faction has arrived to Warhammer 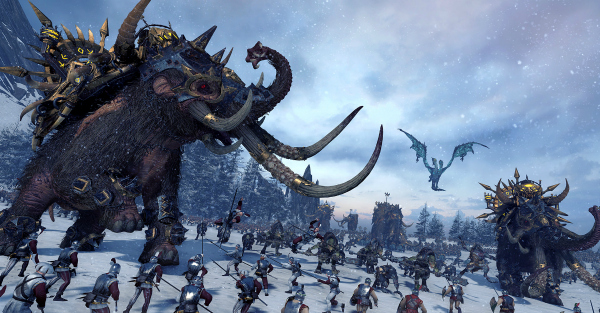 When Total War: Warhammer first launched, the Norscan tribes to the north came across as an unremarkable (yet incredibly annoying) cousin to the Warriors of Chaos faction – upon whose arrival Nosca would immediately descend upon the south, raiding and wreaking havoc on anyone not otherwise engaged with conflict. While they were certainly a challenging foe, it was because of their numbers only; Norsca had the basic warrior infantry of Chaos without any of the neat monsters or elite units, which meant they were an inevitable chore to fend off in the late game.

In the studio’s final major update for the first Warhammer, Creative Assembly has decided to address these problems and transform the Norscan tribes into both a fierce foe and an enjoyable, playable faction.

Check out the cinematic trailer below:

We’re not sure whether it’s the immensely gravelly narrator or the shots of frozen corpses littered across the snow that better sets the tone for the Norsca factions, and we’re equally uncertain if it matters, because the effect is evident either way; the warring tribes of the frozen wastes are intimidatingly brutal, and their thematic presence alone already sets them well apart from Chaos.

From what we can tell of the faction’s information on the Steam store page, the Norsca tribes will have their own monstrous units to compete with the horrific monstrosities of Chaos, including thundering mammoths, packs of wolves, and ice dragons.

Additional details reveal that, while Norsca previously only showed an interest in burning down enemy towns, the new tribes will have a somewhat different focus:

There’s a lot more to cover, including details about the legendary lords, new heroes, and more. For more information visit the Steam store page to view the summaries yourself.

Total War: Warhammer – Norsca will be fully playable on August 10, and will become available on the combined campaign map of Warhammer 2 when it launches shortly after the game’s arrival on September 28.