After losing to Conor McGregor, Nate Diaz was full of excuses 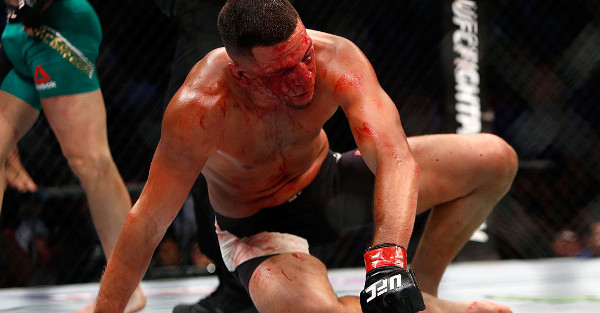 Nate Diaz is starting to look a lot like a sore loser after Conor McGregor nearly turned his face inside out.

After a post-fight, profanity-laced tirade arguing that he should have won UFC 202,  Diaz spoke at length about his loss to McGregor, coming up with all sorts of excuses for why he lost, saying everything other than McGregor simply got the better of him.

?I was injured coming into this fight. And that ain?t some excuse, either. I got the whole thing on tape.? Diaz explained. ?I hurt my knee about a month ago, and I wasn?t able to train jiu jitsu for the past month. And then about two weeks after that, I was just sparring boxing and I really hurt my rib. I got hit in the body by my [training partner], Alan Sanchez is a really good boxer, skilled boxer. And that put me out of sparring about two and a half weeks ago. And I got that all on tape, just to set it up, not to make excuses cuz I got all that video?d up.?

?But, psshh, he shoulda finished me off. If I would have been fighting me, I?d have took me clean out.?

That certainly sounds like an excuse. Diaz also called McGregor out for “running” during the fight.

“He ran the whole fight. You see me chasing him around that thing, like, ‘Where are you going?’ I’m pointing at him and he’s scared to engage,” Diaz said. “I feel like they should’ve took points for that.”

That’s definitely the face of someone who spent the fight chasing his opponent. McGregor won their UFC 202 rematch by majority decision (48-47, 47-47, 48-47) despite landing fewer hits and Diaz’s dominance in the later rounds.