After much controversy, Brock Lesnar’s positive drug tests catch up with him and UFC takes action 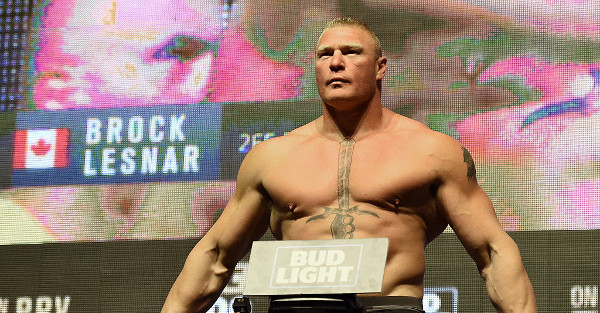 After weeks of speculation, Brock Lesnar has officially been suspended–temporarily–for two positive drug tests stemming from his return to the octagon in July’s UFC 200.

RELATED: WWE isn’t suspending Brock Lesnar, and the reason why is a joke

According to Fox Sports, The Nevada State Athletic Commission revealed Tuesday that Lesnar had tested positive for clomiphene and hydroxy-clomiphene. Clomiphene is an anti-estrogen agent that, according to Drug Free is typically used after a cycle of steroids to prevent many of the side effects that come along with the use of the drug.

Lesnar failed his pre-fight, out of competition sample on June 28 and another on July 9, the night of the fight. Though Lesnar won the fight by unanimous decision, the state of Nevada has the authority to overturn the ruling, pending Lesnar’s hearing, which has yet to be scheduled.

Lesnar faces potential sanctions from both The Nevada State Athletic Commission and the USADA, which governs UFC’s drug testing program. It was revealed that Lesnar had potentially tested positive for doping, just days after Jon Jones had also tested positive and had to be pulled from the fight card in UFC 200.

The WWE could not suspend Lesnar for doping, due to contractual obligations.