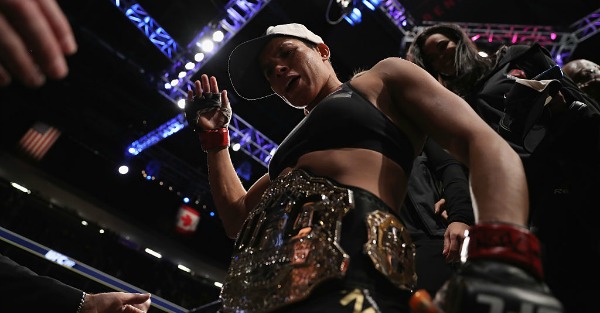 It’s only been one week since Amanda Nunes won the fight of her life against Ronda Rousey and she’s already making herself a target.

UFC bantamweight contender Cat Zingano, for one, isn’t okay with what Nunes has been saying about Rousey and she blasted her on Twitter.

I'm not petitioning a rematch yet @Amanda_Leoa I'll earn it. You're disrespectful of @RondaRousey & I detest you being ungrateful @ufc

Zingano (9-2, MMA, 2-2 UFC) already took out Nunes  (14-4 MMA, 6-2 UFC) in Sept. of 2014 with a third round TKO at UFC 178. But the latter has been a different fighter since with five straight victories, including winning the belt from Meisha Tate in July, and of course defending the title  by dismantling Rousey in 48 seconds.

And Nunes has been more than a bit brash since.

?I don?t understand why those girls lost (to) Ronda Rousey,? Nunes told TMZ Sports. ?I knew since my first fight in the UFC I can beat Ronda Rousey.?