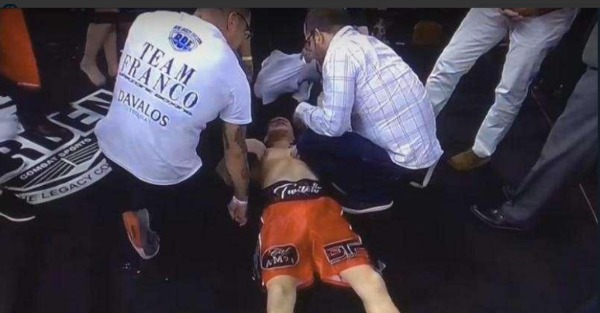 Featherweight Daniel Franco, who has been in medically induced coma following surgery to stop bleeding on his brain, is awake and doing better, his father told ESPN.

“Daniel had his breathing tube removed and is breathing on his own,” Al Franco said. “They added an IV to his carotid artery in his neck and removed all other IVs. He’s progressing well and it’s all thanks to the great doctors and you all. Thank you all for your prayers. He added that his son has been moved out of intensive care.

Injured featherweight Daniel Franco out of coma, breathing on his own and becoming more alert. My story: https://t.co/t28riVX56t

Franco was hurt following a brutal knockout earlier this month.

Daniel Franco remained in a coma on Sunday after suffering a brutal eighth-round knockout loss on Saturday night: https://t.co/qIzPNKTIKC

@sportscenter #SCtop10 Jose Haro wins the #USBASuperFeatherWeight title with one of the most brutal KOs you'll see. #CRUMPLED pic.twitter.com/LiLIp0Q4gh

… and he hit the canvas in a strange way:

Franco was counted out and, according to a account in ESPN, seemed to be alert. But he eventually laid back down and the ring and had to be stretched out. ESPN said Franco was rushed to the hospital, where he underwent emergency surgery to stop two brain bleeds.

His family has set up a Go Fund Me page to help with his medical expenses.