Get ripped like Ronda Rousey with her workout, diet routine 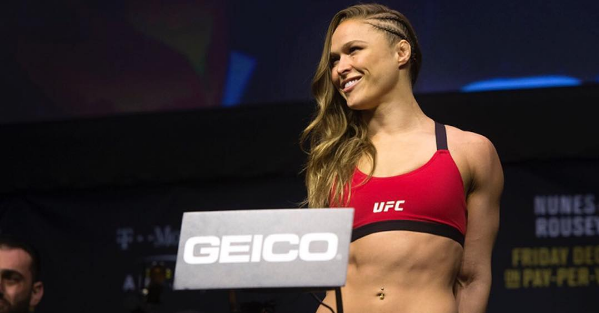 Ronda Rousey may have hit a rough patch with her second consecutive loss last month, but one thing that can’t be taken from her is that incredible physique.

She talked to ESPN W about her habits, workout routine, and how in the world she maintains those killer abs.

“I try to keep healthy-ish, but I’m so on point when I’m in camp that having a vegetable wrap would actually only be healthy-ish because of the wrap on it,” Rousey said, adding that she sometimes dips into the good stuff, but with a few not exactly mouth-watering changes. “Like last night, I got the fried calamari and I took all the bread off before dipping it, and that was my treat. And I had one little rip of the cotton candy because I thought maybe gourmet cotton candy would be different. It wasn’t. And I ate all the raspberries off the desserts. Everyone else had dessert. I ate the raspberries…”

Her workout diet, she says, is even less appetizing. In short, she consumes a strict diet of things like oat bran, egg whites, turkey bacon, raw almonds, raw cashews and Chamomile tea every couple of hours. Then that’s all supplemented with a concoction consisting of nearly every fruit and vegetable known to man.

“And instead of vitamins, I have this giant shake twice a day, so it’s all fresh vegetables and fruits,” Rousey continued. “A whole beet, a whole apple, two carrots, four strawberries, one cup of blueberries, two handfuls of red grapes, one whole lemon, one handful of spinach, one handful of kale, one-fourth handful of parsley, two stalks of celery, two tablespoons of hemp seeds, two tablespoons of chia seeds, one tablespoon of coconut oil, one chard leaf, no stem.”

RELATED: Ronda Rousey’s next fight isn’t in the Octagon

And Rousey’s workout routine is so intensive, words can’t do it justice. Have a look below:

Staying in shape is clearly a full-time job for Rousey, and she detailed to Shape magazine what she goes through.

Two months before a fight, she has a fierce sparring schedule — three times a week (Monday-Wednesday-Friday)  for two to three hours in the morning, followed by another couple of hours of mit work at night.

Then, on Tuesday, Thursday and Saturday, Rousey does a combination of wrestling, judo, bad work, cardio and more. Saturday’s are particularly brutal as she she pushes herself to the extreme with long, difficult runs.

On Sunday, she relaxes with ice baths and maybe a massage.