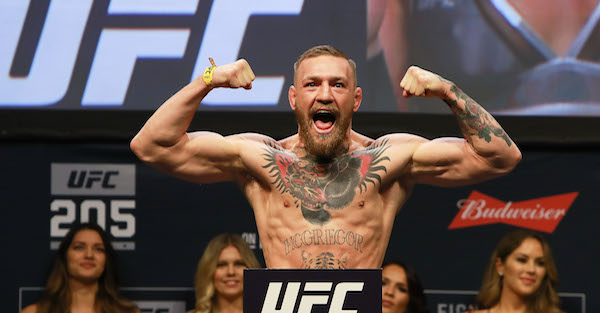 Conor McGregor is the UFC’s first champion to hold belts in two different weight classes (featherweight and lightweight), and if you’re to believe oddsmakers, he won’t be defending either belt soon.

Favored for his next fight is a third tilt at against Nate Diaz (+175) or he could fight for a third belt against welterweight champion Tyron Woodley (+300). McGregor’s rivalry with Diaz has lasted nearly a year after the brash Diaz brother submitted McGregor in their first bout before losing a decision in the rematch.

Woodley and the Irishman traded words ahead of UFC 205 and the heavy-handed champ told McGregor to come get some after successfully defending his belt.

Third is Khabib Nurmagomedov (+400), the undefeated Russian who explicitly told Dana White he won’t fight in the UFC again if he doesn’t get a title fight.

Rounding out the top four is Jose Aldo (+500), who is coming off a decision victory over Frankie Edgar, who wants a rematch against McGregor following his devastating one-punch knockout loss to the current champ.