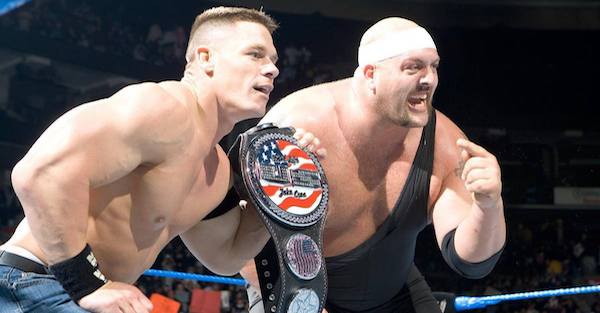 Over his career, the Big Show has done pretty much everything there is to do in professional wrestling. And as of February 2018, his career will be “done,” he noted in an interview with Yahoo! Sports:

“I know I?m done February 2018. That?s when my contract ends as a full-time, live event guy. We?ll see what happens after that, whether I roll into an ambassador role or what WWE has for me. I know I?ve been with them for a long time and I have a great relationship with them. I also understand there?s a time for me to step aside and for other guys to step up. We got a lot of great new athletic talent that will probably be coming up at WrestleMania to be introduced. I don?t have any regrets or any shoulda, coulda, wouldas in my career. I?ve had a very blessed career with the greatest superstars this business has ever seen. And for me, it?s about giving that space up to those guys that are there to do it and me finding new challenges to help inspire and motivate me. That?s what I?ll be doing. Anything to keep from having to get a real job.”

Show is rumored to fight Shaquille O’Neal at WrestleMania 33 in Orlando, Florida, in April, but the two have sparred back and forth in the media in recent weeks on the match potentially not happening.

In the world that continues blurring reality and acting, Big Show recently got a little too real when calling out ?fat? Shaq, via ESPN:

?Maybe he doesn?t want to put on spandex and show the entire world that Shaquille O?Neal, one of the greatest basketball players of all time, looks like Jabba the Hutt,? Big Show said. ?It?s on him. He has to weigh these consequences in his own mind. Does he want the world to know how fat and out of shape he is? Or does he want to sit back and talk s? into a podcast??

After setting up a potential WrestleMania match at last year?s big event, Shaquille O?Neal?s latest comments push back against the Big Show and hint at no match happening, via WrestleZone:

?It?s not going to happen? That?s probably right. It?s not my fault, that?s all you need to know.

But it doesn?t matter, I?m still working out and I still look better than Big Show. I?ll still meet him wherever he wants to meet me. These next thirty days, I?m about to go hard. I?m still doing it like it?s going down.?

Big Show said much of the same, per WWE.com. [H/T Cageside Seats]

?I?ve given 22 years of my blood, sweat and tears to this business and I?m doing this favor to Shaq. This could be my last WrestleMania. He needs to step up. I?m not trying to be mean, but my time?s valuable. I get it. I don?t have foot powder commercials, car commercials, insurance commercials. I get it. He?s a busy man. But if he?s gonna step in the ring, in my business, at our biggest event of the year? Show me you?re serious. If anything, talk a little trash. Let me know you?re motivated. Because right now? I just get the feeling he?s terrified. He shot his mouth off, he?s in over his head and he?s trying to back out. So just let me know what?s going on, brother.?

Since this is the world of pro wrestling, this could just be Big Show cutting a promo on Shaq to help maintain interest ahead of WrestleMania, but as Cageside Seats points out in their daily rumor roundup, there does appears to be some legitimate concern that the match won?t happen after all.

If the match indeed doesn?t happen, it would leave the Big Show open to do something else at WWE?s biggest event of the year. Big Show, who is in fantastic shape and is under 400 pounds right now, and the veteran could make a fine addition somewhere else on the WrestleMania card.

With my trainer Dodd. We're training for 'Mania — hope you are too, @Shaq. #CountingTheWeeks @WrestleMania pic.twitter.com/OPco8Lw2BP

Show has won 23 championships over his career, and he’s the first wrestler (and likely only) to win the WWF/E, World Heavyweight and ECW championships.

Show started wrestling for WCW in 1995, winning his first heavyweight championship within his first year of wrestling.

The former champ has been involved in just about every bizarre angle imaginable, Floyd Mayweather knocking him out:

And of course Brock Lesnar and Show breaking the ring on Smackdown: