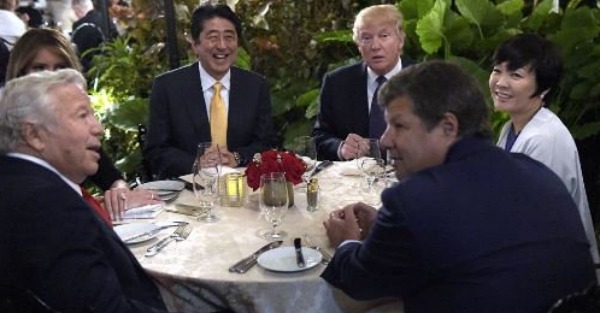 There’s been a lot of coverage recently about New England Patriots player deciding not to attend a trip to the White House to be congratulated on their Super Bowl win by President Trump. Some are boycotting because they believe the President doesn’t represent them; others because they’ve been there, done that.

RELATED:  Another Patriot won’t go to the White House,but  for  a different reason

Patriots owner Robert Kraft is close is to the President, as evident by the below video and photo. He greeted the first lady with a peck on the cheek …

Robert Kraft at Mar-A-Lago sitting w/@RealDonaldTrump & @Flotus & Japanese PM. Trump: "they must have heard you were coming" #wcvb #Patriots pic.twitter.com/Uo7yH1jWNH

Given his closeness to the President, you have to  wonder how he feels about some of his players staying home.

He said:  “This is our fifth Super Bowl in the last 16 years. And every time we’ve had the privilege of going to the White House a dozen of our players don’t go. This is the first time it’s gotten any media attention. Some of the players had the privilege of going in college because they were on national championship teams (and) others have family commitments. But this is America. We are all free to do whatever is best for us and we’re just privileged to be in a position to be going.”