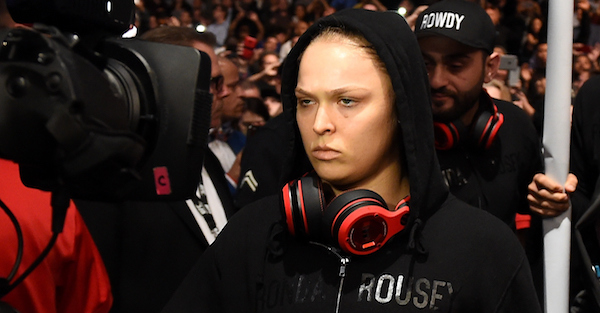 Ronda Rousey has gone into hiding since her devastating beating at the hands of Amanda Nunes at UFC 207, releasing only a comment to thank her fans and express happiness about how far the women’s division has come.

On Monday, Rousey shared her first note at the tail end of her two-fight losing streak at the hands of Holly Holm and Nunes:

UFC heavyweight Ben Rothwell (36-10 MMA, 6-4 UFC) lambasted Rousey on Sirius XM Radio?s Fight Club program recently, saying, among other things, if she can?t climb back from a second-straight defeat to Amanda Nunes at UFC 207 late last month, ?she?s a loser and she never was a champion.?

?What matters is now,? Rothwell said. ?What?s she going to do now? What matters is six months from now if she walks away from the sport and never fights again, she never has to have her name brought up again. If she can?t come back from everything she?s been through and being put on such a high pedestal and making waves, then she loses two fights and she doesn?t come back from that? Well, then she?s a loser and she never was a champion.?

She also may not have taken her fight as seriously, reporting not sparring ahead of her most recent bout:

Namely, according to MMA commentator Kenny Florian, Rousey?s sparring time may have been lacking.

?My understanding is that perhaps Rousey didn?t really spar leading up to this fight,? Florian said on Anik and Florian, the podcast he hosts with Jon Anik. ?I get that they?re trying to preserve her from getting hurt. But you?ve got to have some rounds. You?ve got to be ready for the worst case scenario, which is Amanda Nunes. She wasn?t able to move her head, do anything defensively to avoid the striking skills of Amanda Nunes, and really paid for it.?

These were Rousey’s first comments following her loss:

?I want to say thank you to all of my fans who have been there for me in not only the greatest moments but in the most difficult ones,? Rousey said per ESPN?s Ramona Shelburne. ?Words cannot convey how much your love and support means to me. Returning to not just fighting, but winning was my entire focus this past year. However, sometimes even when you prepare and give everything you have and want something so badly, it doesn?t work how you planned. I take pride in seeing how far the women?s division has come in the UFC and commend all the other women who have been part of making this possible, including Amanda. I need to take time to reflect and think abut the future. Thank you for believing in me and understanding.?

Whether this means Rousey returns to the Octagon remains to be seen.

But it could be the end of the road for the former bantamweight champion, who could be rebuilding her life with a new start. She?s spoken openly about settling down with UFC fighter Travis Browne and continuing her acting career.