This boxing legend’s career ends in the worst way possible. He gets knocked out and falls out of the ring. 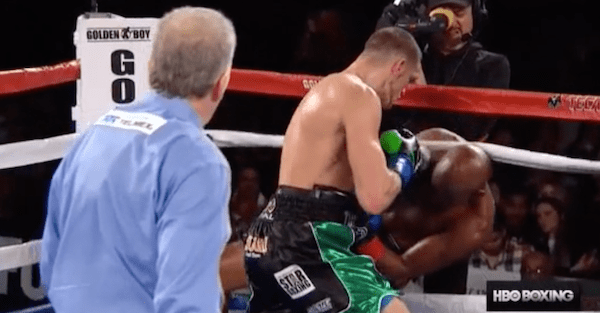 Bernard Hopkins is a true boxing legend. Look at some of this records and accomplishments:

So on Saturday night, Hopkins climbed into the ring one last time, four weeks shy of his 52nd birthday, and some two years since his last bout. He took on a Long Island, N.Y. construction worker named Joe Smith, Jr. who (1) wasn’t born when Hopkins started fighting in 1988 and (2) couldn’t carry the former champ’s mouthpiece when he was in his prime, and (3) was 24-years younger(!)

Watch: @beastsmithjr knocks @THEREALBHOP out of the ring 53 seconds into round 8, ending the fight. #Final1 https://t.co/Pj2svLUlC9

It was the first time in is career Hopkins has been knocked out.

Really, the ending to this boxing career isn’t much different from all of the other greats who thought they could defy father time one more time — and painfully found out  no one can.

The ending was eerily reminiscent of another great fighter’s inglorious end of his career — when the great heavyweight, Joe Louis, was knocked out of the ring by Rocky Marciano.