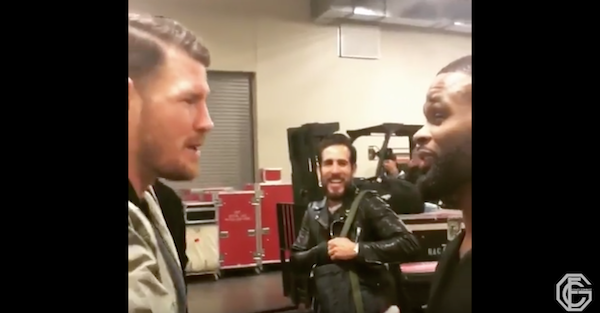 While Michael Bisping tentatively agreed to a middleweight title fight against Yoel Romero “sometime in the Spring” back in November, video has emerged apparently from Friday night’s UFC 207 event that shows the champ is eyeing a different fight altogether.

Bisping (30-7) is seen in a video chatting it up with welterweight champion Tyron Woodley (16-3), where the two eventually agree on a bout in May at a catchweight of 180 pounds.

On his SiriusXM show back in November (via MMAJunkie), Bisping announced he had ?never ducked anyone in (his) life, and never will,? before saying he told UFC President Dana White to ?book the fight? with Romero sometime in the Spring.

Bisping is recovering from what he calls some injections in his knee, and was expecting the Romero fight sometime in the spring unless ?something else transpires in some other situation.?

That “other situation” may be a showdown with Woodley, who stormed through three competitors before winning a majority draw against Stephen Thompson at UFC 200 in his first title defense.

Bisping is 2-0 in his two last two title fights, beating Luke Rockhold by knockout to win the belt and defeating Dan Henderson by decision in his first defense.

There would be no belt on the line in this matchup.