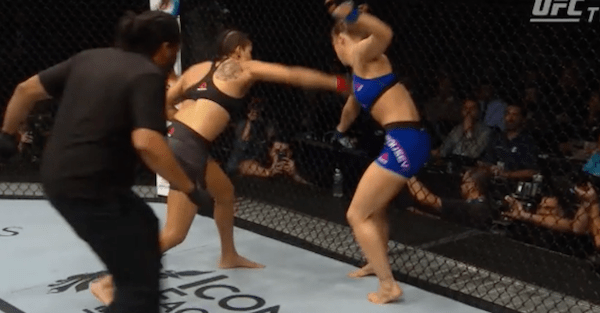 Ronda Rousey (12-2) returned to the Octagon for the first time in more than a year when she went toe-to-toe with Amanda Nunes (14-4) for the bantamweight crown Friday night at UFC 207, and she didn’t make it out of the first round.

Nunes attacked her from the opening bell and tore her apart with lefts and rights to end the fight in just 48 seconds.

Rousey suffered her first professional loss at UFC 193 in November of 2015. She was on a 12-fight win streak dating back to 2011 ahead of her loss. Rousey has beaten the who’s who of contenders, taking out the likes of Miesha Tate (twice), Sara McMann, Alexis Davis, Cat Zingano and Bethe Correia. She entered the Octagon Saturday night in the best shape of her career.

Nunes was on a four-fight win streak heading into her bout with Rousey, with her latest victory over Miesha Tate in a stunning upset at UFC 200. She last lost at UFC 178 against Zingano.

Rousey’s future is very much up in the air. She’s spoken openly about settling down with UFC fighter Travis Browne and continuing her acting career. We’ll see where this conclusion takes her, but the smack talking Brazilian Cris Cyborg is no doubt still seeking one final massive super fight.