UFC boss Dana White has no sympathy for hospitalized fighter 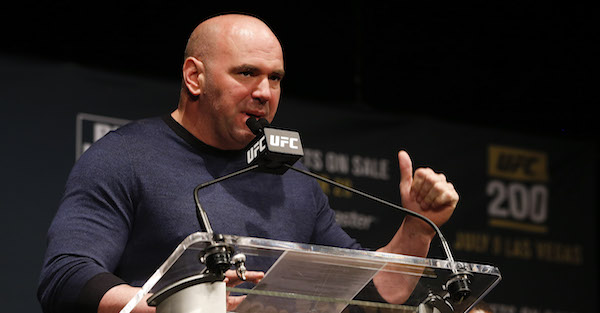 UFC President Dana White wasn’t pulling any punches when speaking about Khabib Nurmagomedov, the contender for the lightweight championship who was pulled from the UFC 209 card after his weight cut attempts put him in the hospital.

While speaking with MMA Junkie, White was clear with having reservations about inking another deal for Nurmagomedov to fight Tony Ferguson for the interim belt.

?To be honest with you, Khabib fought (at UFC 205) in New York in November then here in this fight,? White said. ?Two back-to-back weight cuts like that. I don?t know if he can make the weight or if he needs to get a better plan (or) dietician. Something.

?I don?t know (what he should do). He got within six pounds and was in really rough shape. He?s going to have to take some time to recover from this weight cut, and then I don?t know what to do.?

White also expressed frustration in the way Nurmagomedov’s camp handled taking the fighter to the doctor, instead of reaching out to the UFC medical staff.

?When you walk into just some random hospital here in Las Vegas and they see the guy and they tell him the weight cut, they just start filling him with fluids. (Dr. Davidson) would have checked his vitals, seen where he was. I?m not saying that the fight could have been saved, but maybe it could have. We?ve been in these positions before. This isn?t our first rodeo.?

Nurmagomedov had been vocal against current champion Conor McGregor before ultimately receiving his title fight, which was scheduled for Saturday evening.

Ferguson has also spoken out, believing that McGregor is ducking him:

?I have a nine fights in a row win streak. Khabib has eight fights in a row,? Ferguson said. ?This is the first time you guys are ever gonna see this inside the octagon. This is for an interim title. It should be for the real s**t. Am I a little pissed about it? Yeah. Is Conor gonna defend his belt, that little (b***h)?  Probably not. He?s gonna run. Go ahead. Go run. Go try to box. You?ll get your ass kicked too. And when you?re ready to come back, they?re gonna strip your belt and at 155, I?m gonna be holding it and you?re gonna be like, ?Oh I want my belt back? and this and that. I don?t give a shit. The fight, the real fight, is between Conor? No. Conor, sorry buddy. The fight?s between Khabib and Ferguson.?

Meanwhile, McGregor?s only UFC lightweight division fight came in a win over Eddie Alvarez. Ferguson (12-1) and Nurmagomedov (8-0) have a combined 21 fights in the division.

We?ll see if this one gets rescheduled.