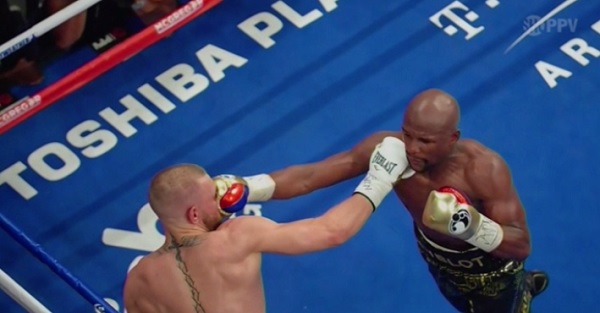 We have a winner!

The superfight between Conor McGregor and Floyd Mayweather captivated the nation, and with an audience of millions, Mayweather (50-0) finished McGregor (0-1) with a technical knock out in the 10th round.

Mayweather announced after the fight that this would be his last match, as he praised McGregor for lasting as long as he did.

Robert Byrd was the official for the fight. Despite both coming in around the same weight, McGregor clearly looked like the bigger fighter after rehydrating from Friday’s weigh in.

McGregor was aggressive early, with Floyd almost laughing at the effort at the beginning. After the initial effort by McGregor, the fight immediately slowed down as Mayweather was going with his usual strategy of measuring a fighter before tossing punches. Conor landed the biggest punch of the round, which likely won him the round in total with an overall lack of punches.

The second round started with some more quick action, with McGregor potentially landing an illegal punch on the back of the head of Mayweather. McGregor again mostly controlled the round as Floyd relied on his defense.

Mayweather finally started to get more active in the third round, with McGregor still using some timely counter punches to even out the fight. McGregor again nearly got in trouble with punches to the back of the head, but McGregor also had some jabs that made contact.

Round 4 opened again with McGregor coming out aggressive, with Mayweather on the defensive trying to lean on McGregor to slow down the fight. After the initial burst, Mayweather picked up the pace and landed some key punches, although McGregor again was able to hold his ground.

The fifth round was much of the same from earlier, with McGregor starting as the more active fighter until Mayweather picked up his activity. Mayweather landed some significant strikes near the end of the round, but again, another slow three minutes without either fight gaining much of an upper hand.

Mayweather finally started to open up in the sixth round, landing a good series a strikes that really started to get the crowd into the match. McGregor was able to stave off the series. That said, Floyd looked like the dominate fighter for once, as he was able to establish some control.

The seventh round was again like the sixth, as Mayweather’s conditioning started to show as he again remained active while McGregor started to slow down. Mayweather landed the most significant strikes of the round.

McGregor was able to reverse the tides a bit in the eight, opening with a some good strikes that was able to stop the run that Mayweather had established over the past few rounds. The round was close, as both were able to land to strikes, with Mayweather slowing down from what he had done in Rounds 6 and 7.

McGregor opened the ninth with a few punches that potentially hurt Mayweather, as he backed him into a corner. Floyd was able to respond about halfway through the round, as McGregor looked as he started to tire out. Mayweather really started to establish the upperhand, as McGregor just looked exhausted as he absorbed punch after punch. McGregor survived the round, but Mayweather finally looked like the legendary boxer that he is in this round.

In the 10th, Floyd continued his dominance, and he clearly stunned McGregor early in the round. Eventually it became too much, as Byrd stopped the fight as McGregor was clearly staggering all over the ring.

Both Mayweather and McGregor are looking pretty after the fight, at least financially. Mayweather is reportedly set to take home over $100 million from the the event, while McGregor is netting at least $30 million.