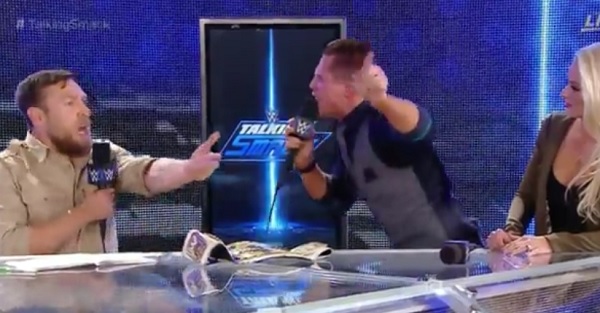 Who says there aren’t any great promos left in the WWE?

Then things got really personal, really weird, and… well, just a little too real.

Miz asked Bryan what exactly he doesn’t like about him, and Bryan responded that he thinks The Miz wrestles like a coward. Miz then unleashed into the rant of his life, claiming that the reason he wrestles that way is also the same reason he is still wrestling and is never injured. Bryan, on the other hand, famously retired in February due to concussion concerns.

Bryan simply responded that if the WWE would let him, he would be out there in the ring. But that wasn’t enough for The Miz.

Bryan then walked off the set, as The Miz continued on his tirade. The entire segment blurred the lines of what was scripted and what may have turned into real emotion from The Miz.

Many fans are wondering what was real and what was scripted because of one big reason: one of the only reasons to even have this segment is to build up something between Bryan and The Miz. If Bryan can’t wrestle, then what was the point?

Regardless, we got a hell of a segment out of this, and who knows: maybe we will actually get a match out of it at some point down the road.