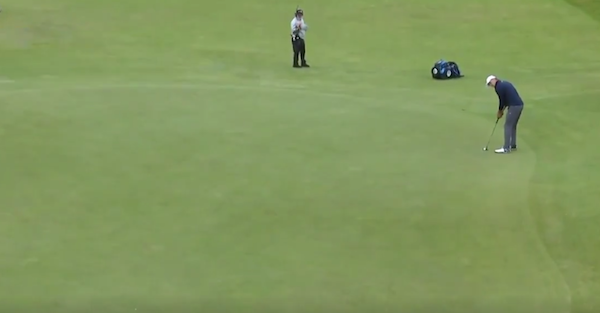 The legend of PGA superstar Jordan Spieth added another chapter Sunday afternoon as he pulled off an absurd comeback at The Open that included an incredible eagle shot on the 15th hole.

The shot, which you can watch below, put Spieth in sole possession of first place. A position he wouldn’t give up for the rest of the day.

Jordan Spieth buries a 50-foot eagle to get to -10 and take the solo lead at @TheOpen. Three holes to play. pic.twitter.com/G7SgiPQjAl

Jordan Spieth is the second youngest golfer to get three legs of the grand slam, trailing only Jack Nicklaus. Yep, even before Tiger Woods.

Spieth who has already been compared to Tiger Woods a lot early in his career, is now only behind the greatest golfer of all-time, Jack Nicklaus, in the stat above.

After bogeying on the 13th hole, sunk a birdie, eagle, birdie, birdie and par to cap off the one of the most impressive finishes you’ll ever see on the green.