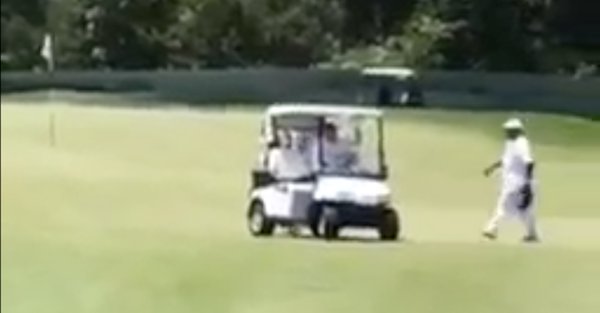 President Donald Trump owns 19 golf properties around the world, and he plays a pretty good bit of golf in his spare time when he’s not leading the free world.

During his latest appearance on the golf course, Trump broke a rule guaranteed to send golf fans in a frenzy. Trump was playing at Trump Bedminster, which is the host site of this year’s U.S. Women’s Open. And a video was taken of Trump driving his golf cart on the green.

Trump driving across the greens is such a Trump move it hurts pic.twitter.com/J4Rnyw3Qq4

Related: Golden State Warriors have a history of calling out President Donald Trump

Driving a golf cart on the green is practically unheard of due to how much damage it can cause and how it affects the green.