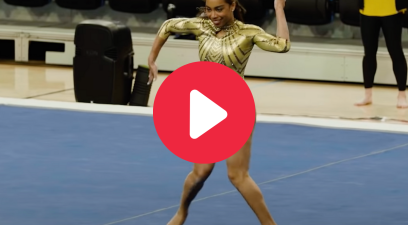 Being an NCAA gymnast and also being a member of the U.S. Senior National Team is grueling, which is why it’s rarely done. Aside from year-round training, finding balance in the classroom and the gym (Yes, I did just make a gymnastics pun) requires a special kind of person to do it all at a high level.

It’s time you meet Florida gymnast Trinity Thomas. She’s the only person on a 2020 NCAA roster and the U.S. national team; This is her fourth year earning a U.S. team spot. As a freshman last year, Thomas was a five-time All-American, the 2019 SEC Freshman of the Year, and the Southeastern Conference’s vault champion. The freshman was also a NACGC Scholastic All-American, and all the while, she’s eyeing the 2020 Olympic Games in Tokyo, Japan with USA gymnastics.

In an interview with ESPN, Thomas was asked what her individual goal was for the upcoming University of Florida gymnastics season.

It took Thomas three weeks to accomplish that goal.

The third-largest crowd ever in the Exactech Arena at the Stephen C. O’Connell Center saw its hometown team knock off the reigning SEC Championship meet winner LSU Tigers. It was No. 8 LSU visiting No. 2 Florida, but UF came out on top, finishing with a team score of 198.375, which was the highest in the nation this year and third-highest in school history.

But it was sophomore Trinity Thomas’ perfect 10.0 on uneven bars, the first perfect score of her collegiate career, that stole the show in Gainesville.

Thomas’ 10.0 was the 42nd in school history, and she becomes the 14th Florida Gators gymnast to accomplish the feat. Only Thomas and UCLA’s Kyla Ross have scored perfect 10s on uneven bars this season.

Thomas’ incredible routine was No. 1 on Sportcenter’s Top 10 Plays.

The UF sophomore was nearly perfect in her floor exercise, too, posting a mark of 9.975, which tied for first alongside LSU freshman Kiya Johnson.

Not to be outdone, Johnson stuck a perfect score of her own on balance beam in the very same meet.

Florida’s next meet will be January 31 on the road against Kentucky. The Gators are perfect so far this season, and with Trinity Thomas and this roster flourishing, this Gator gymnastics team could be eyeing a serious NCAA Championship run come April.