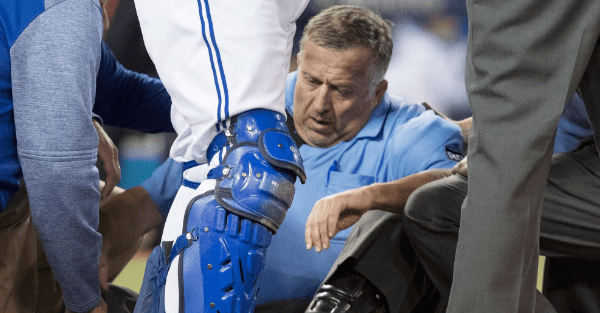 Umpires are in the direct line of fire, and Dale Scott found that out the hard – and painful – way.

Scott, umpiring behind the plate during the Baltimore Orioles-Toronto Blue Jays game, took a foul tip right off the mask and dropped like a rock.

He was clearly hurt …

… and it was so bad he had to be stretchered off the field.

After taking a foul tip off the mask, Dale Scott has been diagnosed with a #concussion & our thoughts are with him https://t.co/Upxl9rS3qM pic.twitter.com/rfMhRqa4Z6

Scott suffered a concussion as a result of the foul tip from the Baltimore Orioles’ Mark Trumbo.

The Denver Post reported that umpires are normally out about a week after suffering a concussion, and that Scott also suffered a concussion last year off a foul tip.