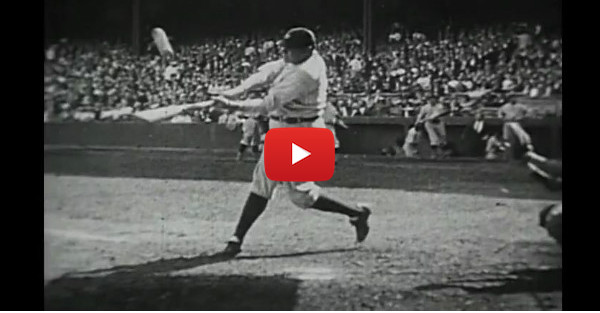 It’s rare that we get to see incredible footage of Babe Ruth and Ty Cobb look really bad in videos. Grantland’s Jonah Keri got to tour MLB Productions’ video archives and came across this “instructional” video. It’s unclear if the instructional video is of what not to do because Cobb’s and Ruth’s swings are awful. Obviously, those two hitters are arguably the greatest the game has seen, so seeing them struggle like this is really neat and odd at the same time.

Cobb’s swing is so bad that he looks like a guy that grabbed a bat for the first time and has no idea what to do with it. His hands are far apart from each other and he lunges to the ball with his knee almost touching the dirt. It’s really ugly.

Ruth looks like a guy who can only hit fastballs. He puts all of his weight on his back foot then explodes at the ball with all of his might. If he was thrown any off-speed pitch, he may have fallen over.

In the video we also get to see one of the best pitchers ever: Walter Johnson. Johnson looked like he pitched with ease. His sidearm-slingshot delivery looks like it would put loads of strain on the elbow, but Johnson had zero problems with it as he struck out 3,509 batters.

This is definitely one of the most-breathtaking videos I have ever seen of the three of the game’s legends. Let’s hope more videos like this one surfaces.