Anthony Rizzo specializes in the ridiculous, makes another insane catch 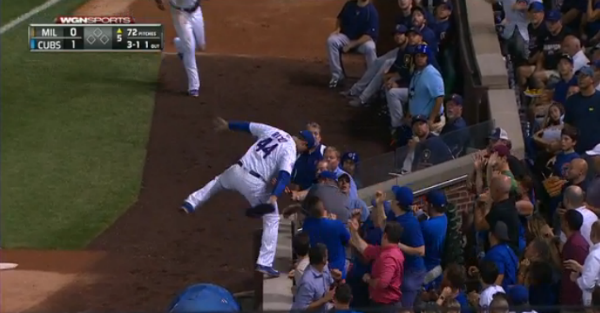 Anthony Rizzo is beginning to look like a better outfielder than most outfielders.

In the fifth inning of the Cubs 4-1 victory over Milwaukee Tuesday, the first baseman jumped on top of the rolled-up tarp in shallow right field, then hopped onto the mini brick wall right behind it and made an almost fully extended catch of a foul ball in the stands in between spectators. All without ever hitting the deck. It was a carbon copy of the play he made a little over a year ago against the Brewers.

“I got a good dismount, could’ve stuck the landing a little better, but I’m pleased with it,” Rizzo said after the game. “I surprised myself that I caught the ball, to be honest. It’s one of those fun plays — if you make it, you look great, and if you don’t, you look like a fool.”

Indeed, it was like some sort of gymnastics dismount when he finished the play by jumping back onto the field. And it was every bit as spectacular as something you’d see in the floor exercise at the Olympics. Rizzo made a similar play in 2013, diving into the stands for a foul ball in shallow right. Save for the hitting the deck part, as he crashed pretty hard into the seats for that one.

“He does a great job of knowing his home park, and knowing what he can and can’t do in this park,” he said. “That’s incredible athleticism to take the step and keep your eye on the ball. It’s really impressive. I’d be more impressed if I hadn’t seen it already.”