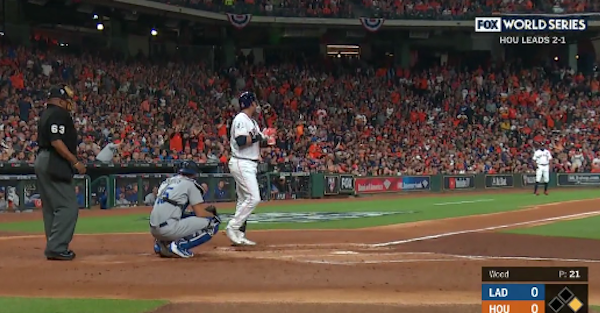 Houston Astros first baseman Yuli Gurriel was handed down his punishment after making a racist gesture during Game 3 of the World Series on Friday night, resulting in a five-game suspension that won’t start until next season.

On Saturday, when he got up to bat, Astros fans didn’t boo him, and they didn’t simply cheer like any normal player. They gave him a standing ovation.

Astros 1B Yuli Gurriel suspended without pay for first 5 games of 2018 regular season for inappropriate actions during last night’s game.

Gurriel was caught on camera putting his fingers to the side of his eyes and saying “chinito” — a derogatory Spanish phrase that translates to “little Chinese” in regards to Japanese Los Angeles Dodgers pitcher Yu Darvish, who he had just hit a home run against during the Astros’ 5-3 victory.

“I didn’t try to offend nobody,” Gurriel said to the Houston Chronicle. in Spanish through a translator after the game. “I was commenting to my family that I didn’t have any luck against Japanese pitchers here in the United States.”

Gurriel said the term was commonly used in his native Cuba to refer to Asian people and that he was aware that the term was viewed as offensive by Japanese people because he played in Japan during the 2014 season.

“In the moment, I didn’t want to offend him or nobody in Japan because I have a lot of respect for them and I played in Japan,” he said, adding that, “I didn’t mean to do it.”

Darvish, who is of Japanese and Iranian descent, commented on the incident after the game through a translator.

“Acting like that, you just disrespect all the people around the world,” Darvish said.

Gurriel said he intends to speak with Darvish personally about the incident.

“Yes, of course. I want to talk to him because I have nothing against him,” he said. “I think he’s one of the best pitchers in Japan, and I never had success against him. … If he felt offended, I want to apologize to him.”