Catcher takes a foul ball off the throat, forced to leave the game after getting hit again 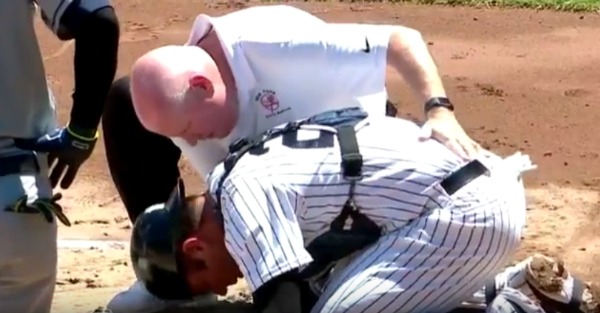 First, the backup catcher for the New York Yankees took a foul ball off his throat in a game against the Tampa Bay Rays. At one point, it looked like he was going to vomit on the field.

Still, he stayed in the game because, he’s a catcher.

But he eventually was forced to leave when he was hit on the hand by a pitch, and by the time he got to first base, he had a black and blue knot the size of an apple.

That's Austin Romine's left hand after he was hit by a pitch to load the bases in the sixth. #YANKSonYES pic.twitter.com/ss8pupKODz

Reports after the game said his hand was just bruised, and he may only need to take a couple of days off.

Joe Girardi is indeed optimistic that Austin Romine will only need a couple days after being hit on the hand today. #YANKSonYES pic.twitter.com/fIMp4v6UdC

But remember, he’s a catcher, and those guys are tough as nails. Wouldn’t surprise me if he already took some swings in the cage.