Baseball needs to change this stupid rule before someone gets hurt 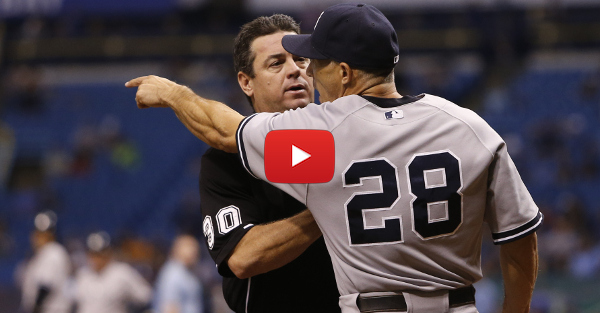 RELATED: The FanBuzz baseball preview picks a surprise team to win it all.

Yankees manager Joe Girardi has a strong opinion about this baseball loophole, and he has a point.

In Tuesday’s season opener against the Houston Astros, Yankees relief pitcher Dellin Betances was left with an impossible decision. With a runner on second base, Houston’s Carlos Correa hit a dribbling ball, down the first base line. Betances went to scoop it and in an effort to get the out, tried to lob the ball over Correa’s head. The problem? Correa’s in the way of a clean play.

According to MLB rules, Correa?s allowed to be running on the grass. But unless Betances? throw hit Correa, Correa?s path to first does not constitute interference.

?I don?t think that?s what baseball wants,? Girardi said. ?So to me, it?s something that probably needs to be looked at?. What?s Dellin?s option there? Hit him in the back? Is that really want we want?”

Umpire Dana Deluth made the interpretation of the play being an error (because of how the rule stands) and when told of Girardi’s rhetorical question, his response was, “Do it. Throw it into the runner?s back. Because then what?s happening? He is impeding.?

Talk about harsh. Girardi is hoping for a clearer explanation of the rule. A similar play could be the difference in winning and losing and which play do you think would be made?