Blue Jays pitcher hit in the head with a line drive, and it’s as brutal and scary as it sounds 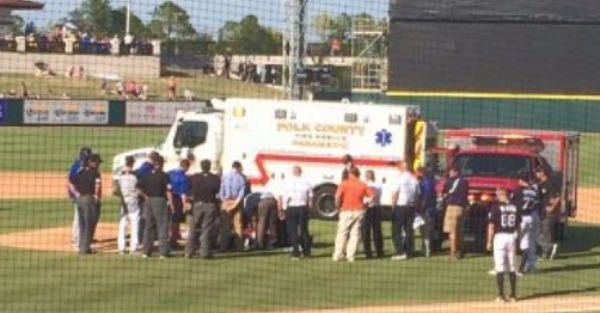 This was a very scary sight.

Blue Jays pitcher T.J. House was hit in the head with a line dive in today’s spring training game against the Detroit Tigers and it sounds horrible.

Tigers manager Brad Ausmus says TJ House was "bleeding quite a bit. There was blood on his face, blood in his glove, everything."

House was on the ground for a very long time

T.J. House has been on the ground for 18 minutes after being hit on side of head by a John Hicks line drive. Going into ambulance now.

Reports say House gave the thumbs up as he left the field, and he’s now being evaluated at a local hospital.

Just after being strapped to a stretcher & then put into ambulance #BlueJays TJ House signalled crowd with thumbs up pic.twitter.com/69l3SNoIKd

TJ House of @BlueJays gives crowd thumbs up as he is taken to stretcher Game is called 6-2 bottom 9. pic.twitter.com/pFXVaJkSQF

And, accounts say the ball literally rocketed off his face.

It went way up in the air, back towards the plate and over towards the first base line. https://t.co/TX162csIBB

The game was called in the bottom of the ninth inning.