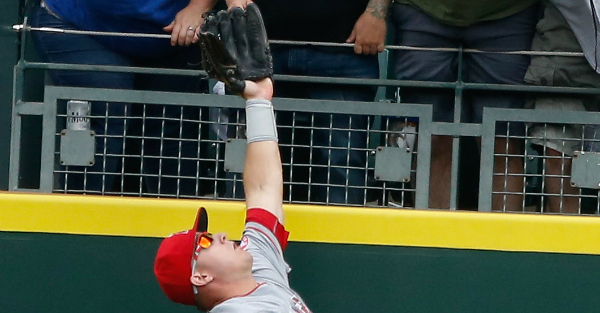 Mike Trout celebrated his 25th birthday by robbing another home run. Trout, who’s made a name for himself in the realm of outfield acrobatics, made a spectacular catch against the Mariners on Sunday.

Seattle’s Leonys Martin hit a deep fly with the bases loaded. But instead of a grand slam, Trout chased the ball to the warning track, waited a second, leaped and pulled the ball back in from over the wall.

Trout’s timing was perfect. Though Seattle still scored one run off the hit, a sacrifice fly is a lot better than a home run. The catch didn’t help save the day, though; the Mariners won the game 3-1.

RELATED: Kevin Keirmier makes like a ballerina, and twits and turns to make an amazing catch

Now if the Angels can find some pitching to go with Trout and slugger Albert Pujols, they could be contenders. The team currently has a 4.46 ERA, which ranks 24th out of the MLB’s 30 teams.