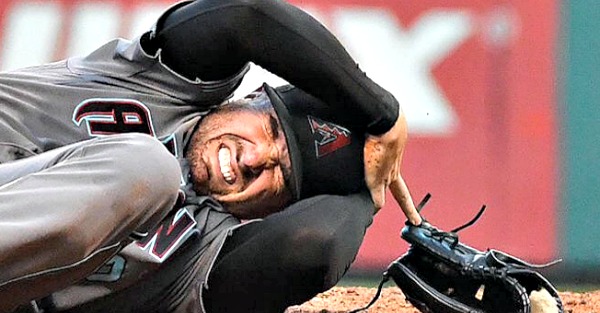 Arizona Diamondback’s pitcher Robbie Ray will be placed on concussion protocol after he was hit in the head with a line drive during Friday night’s game against the St. Louis Cardinals.

Luke Voit of the Cardinals hit a scorching line drive back through the box and hit Arizona pitcher Ray in the head. It was frightening.

Robbie Ray was hit with a line drive, less importantly Daniel Descalso still caught it in foul territory for the out pic.twitter.com/sQ3Qn1EIIc

One measurement said the ball game off the bat at 108 miles per hour.

Ray immediately went down in agony, and had to be carted off the field. But, according to AZCentral, Ray took a few stitches to the head and made his way back to the clubhouse.

Ray needed a few stitches, then returned to the park, showered and is back resting at the hotel.

“You’re holding your breath,” manager Tori Lovullo told AZCentral.com. “It’s tough. Those are things you never forget. I got out there and he was on his back and his eyes were open. That was the first thing that I saw, and I was very grateful for that.”

Under MLB’s concussion protocol, players are automatically placed on a seven-day disabled list and then have to be evaluated before being allowed to return.