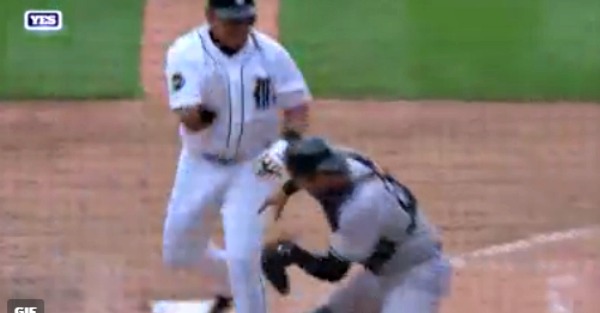 It all started a couple of inning earlier when Tigers starting pitcher Michael Fullmer drilled red-hot DH Gary Sanchez in the hip after he had hit a home run earlier in the game.

Then, with two outs in the bottom of the sixth, Yankees pitcher Tommy Kahnle threw behind Cabrera, and was immediately ejected from the  game, as was manager Joe Girardi, who was thrown out for arguing. With Aroldis Chapman warming up, replays show Cabrera approaching Romine, and when Romine took off his mask, Cabrera threw two punches and the benches emptied.

Watching replay, Cabrera said something to Austin Romine, Romine yelled back, Cabrera shoved him, and they went at it.

Romine, Cabrera and Kanhle were all thrown out of the game. Expect the league to hand down suspensions in this one.