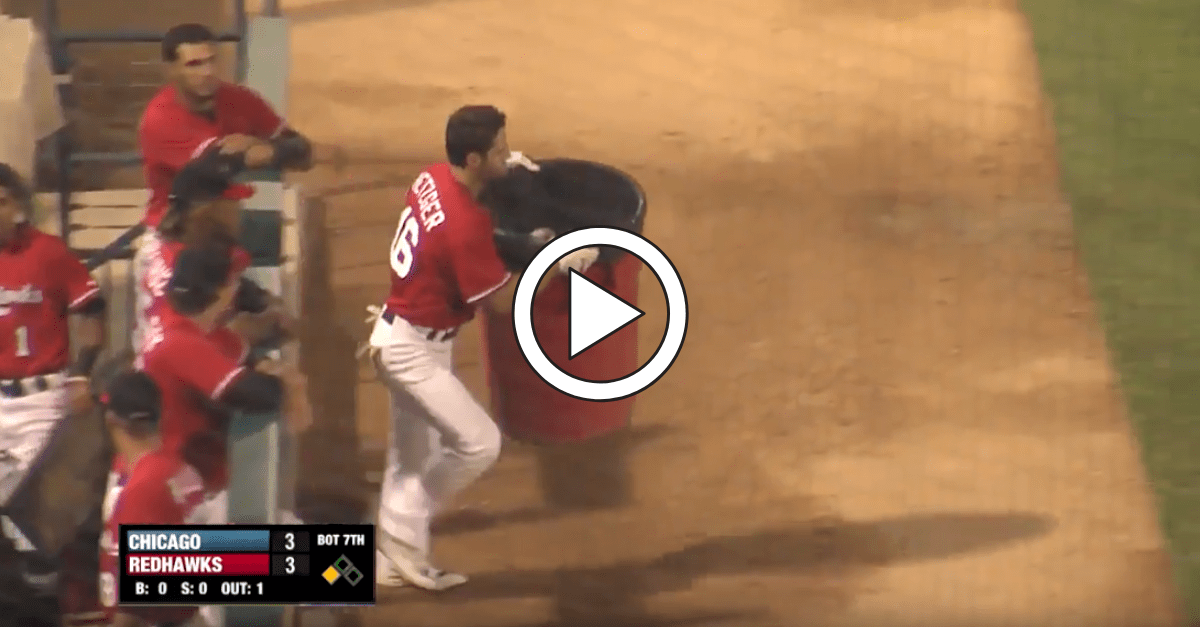 The Fargo-Moorhead Redhawks are not affiliated with any Major League Baseball club, but the two-time American Association champions were named Baseball America’s Independent Team of the Decade during the 1990s.

They may not be a top-flight baseball team, but the Redhawks sure are passionate about the game of baseball. Just ask Redhawks outfielder Brennan Metzger how much he loves America’s favorite pastime.

The now-30-year-old ballplayer hails from San Diego, California. The San Francisco Giants drafted Metzger in the 22nd round of the 2012 MLB Draft, but his professional career never panned out. He played for independent teams such as the Gary SouthShore Railcats and Sonoma Stompers before finding his way to Fargo, North Dakota.

During a 4-3 win over the Chicago Dogs at Newman Outdoor Field back in 2018, Metzger was called out on a third strike, and he didn’t like the call one bit.

Redhawks manager Michael Schlact tried holding him back, but to no avail.

What follows is one of the most greatest meltdowns in baseball history.

It’s difficult to hear, but Metzger slams down the trash can, turns to the home plate umpire and proclaims, “Go to your home!”

Metzger was ejected from the game, but I don’t think he seemed to mind it at all.

No one is topping this hilarious meltdown for a long time.

In 95 games played that season, Metzger was one of the Redhawks best hitters — his .398 on-base percentage and 76 runs scored were the club’s best, and he ranked top-5 in both hits and home runs. Metzger did, however, lead the team with 77 strikeouts

The Redhawks finished that season 51-49 and failed to make the playoffs for a fifth-straight season.

Brennan Metzger batted in all five Redhawks runs this afternoon, including a grand slam in the fifth inning, as Fargo-Moorhead won its fourth straight series with a 5-2 win over the @StPaulSaints. Recap: https://t.co/RmQN2KdHHo pic.twitter.com/KssmYQJy1n

The American Association of Independent Professional Baseball doesn’t get a lot of attention, but Metzger just delivered one of the most epic baseball meltdowns of all time.

Move over, Lloyd McClendon. There’s a new sheriff in town.

This article was originally published August 7, 2018.