The curse of the Billy Goat is dead. The Chicago Cubs win their first World Series in more than 100 years in classic fashion. 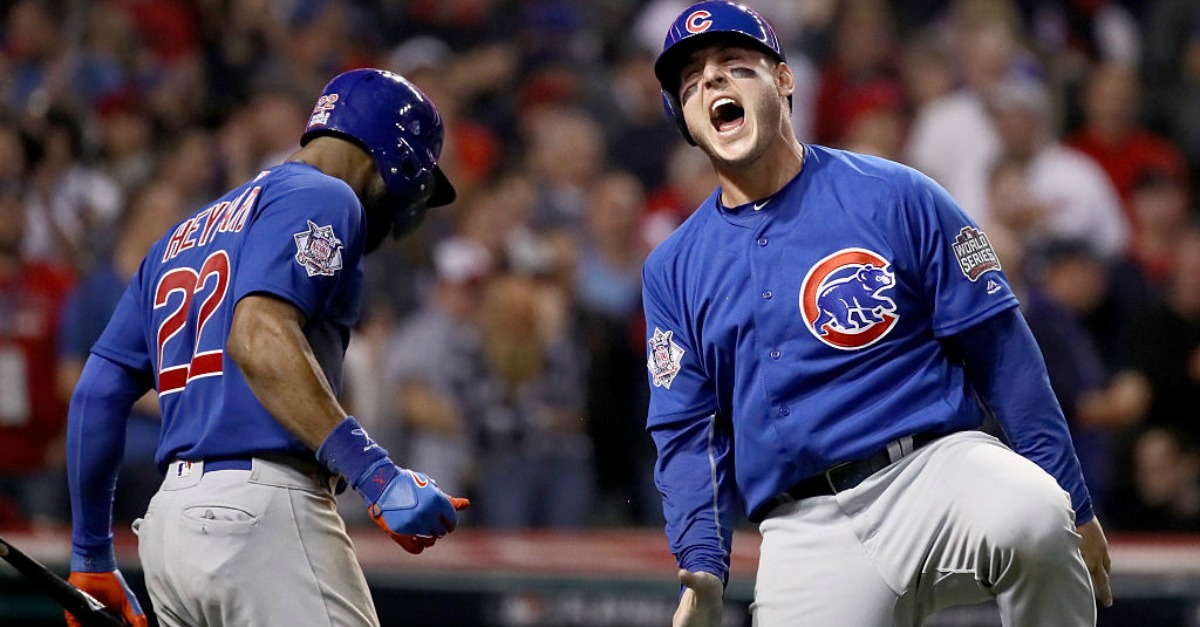 Ezra Shaw Getty Images
in Game Seven of the 2016 World Series at Progressive Field on November 2, 2016 in Cleveland, Ohio.

In an amazing and wild Game 7 sure to become a classic, the  Chicago Cubs powered past the Cleveland Indians 8-7 Wednesday to win their first World Series since 1908. The Indians haven’t won a World Series since 1948, and their fans will have a sports fans most painful refrain — wait until next year.

Cleveland’s Rajai Davis — who earlier made a crucial error that allowed a Chicago run to score — hit a dramatic two-run home run off closer Arodlis Chapman to tie the game in the 8th, but the Cubs scored two in the 10th off Bryan Shaw, who was clearly running on fumes. Carl Edwards Jr., a 25-year-old rookie with 40 total innings of big league experience,  gave up a run in the bottom of the 10th, and Mike Montgomery

It was a Game 7 that contained two firsts — it was the latest game-tying home run in World Series history, according to Fox Sports; and, Chicago opened the scoring on leadoff hitter Dexter Fowler’s home run off Indians starter Corey Kluber. It was the first time a batter lead off the seventh game of a World Series with a home run. Not only that, the game was delayed 17 minutes at the start of the 10th inning because of weather,

Chicago trailed three games to one and Cleveland looked like it was on the cusp of winning its long coveted championship.  But the Cubs took three straight and became just the sixth team in World Series history to overcome a 3-1 deficit.

The Indians tied the score in the third when Coco Crisp doubled off Cubs starter Kyle Hendricks, went to third on a sacrifice bunt, and scored on Carlos Santana’s sharp base hit to right.

But the Cubs scored two in the fourth.  Kris Bryant — who lead off the inning with a single — scored on a sac fly by Addison Russell, and Ben Zobrist scored from second when Davis misplayed a ball and it sailed over his head.

Baez hit a solo shot in the fifth to extend Chicago’s lead to 4-1, and the Cubs scored again in the sixth when Bryant scored on an Anthony Rizzo double that he ripped to right off the previously unhittable Andrew Miller. Ross hit his homer in the sixth, also off Miller.

The bottom of the fifth was as wild as you’ll see. Cubs manager Joe Maddon pulled Hendricks with two outs and Carlos Santana on first for the lefthander Jon Lester, who would face the lefty swinging Jason Kipnis. Kipnis hit a slow roller that catcher David Ross threw away, allowing the runners to advance to second and third. Then Lester threw a wild pitch that bounced in the dirt, hit Ross in the face mask, and appeared to momentarily daze him. Not only did Santana score, but Kipnis came around from second and scored, too.

The Indians scored in the eighth when Brandon Geyer brought home Jose Ramirez with a double, and Cleveland  cut the deficit to two. And then, magic. Maddon brought in Chapman, and he  gave up a two-run bomb to Davis, who had not hit a home run since August 1. The crowd at Progressive Field went nuts.

This is CRAZY. The scene outside Progressive Field as the @Indians tie the game. #WorldSeries #Game7 https://t.co/1u7R4dD952

Clearly, Chapman was gassed. He threw 97 pitches over the last three days; his previous high was 88 over four days, according to Fox.

Then, in the ninth Chicago had a chance to score when Jason Heyward — who had has a miserable year and postseason — stole second and went to third when the throw skipped into center field. But, with one out, and the infield in, Javier Baez oddly tried a safety squeeze with two strikes and fouled the ball off.

But Chicago cashed in when, in the 10th, they scored two runs off a tiring Shaw.

So there goes the curse. For those not familiar with the legend, William Sianis, the owner of Billy Goat tavern, brought his pet goat to a Cubs World Series game in 1945. When fans complained about the goat’s smell, an angry Sianis left the park and cursed the team. There are several variations of the tale, but it no longer matter.

The Chicago Cubs are the world champions.