Tim Tebow hit some serious bombs during this workout, and now MLB teams are interested 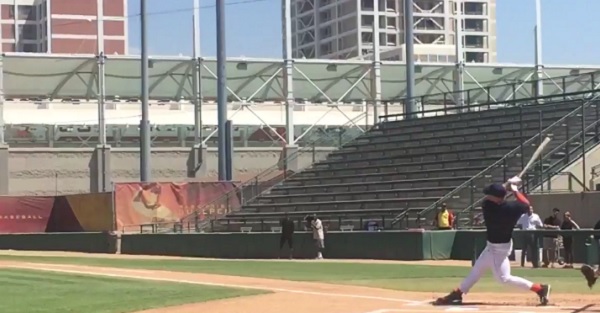 Tim Tebow had his long-awaited workout in front of scouts on Tuesday afternoon at USC, and he didn’t look half bad. According to SI.com, reporters that covered the workout said he ran a 6.7-6.8 60-yard dash, which is right around the MLB average.

Tebow, who hasn’t played in an NFL regular season game since 2012, is trying to start a baseball career. He’s been training this summer in hopes of landing with a team, and has already received an offer to play winter ball of one of Venezuela’s top squads.

The ex-quarterback also took batting practice and hit some bombs.

Tebow has hit some major bombs. Here's one of at least four into, or over, the trees in right. pic.twitter.com/vmxYgoA817

Tebow also fielded balls in the outfield for scouts.

Though reports say scouts opinions were mixed, the good news for Tebow is he reportedly has a few teams interested in signing him. This includes, among others, the Atlanta Braves.