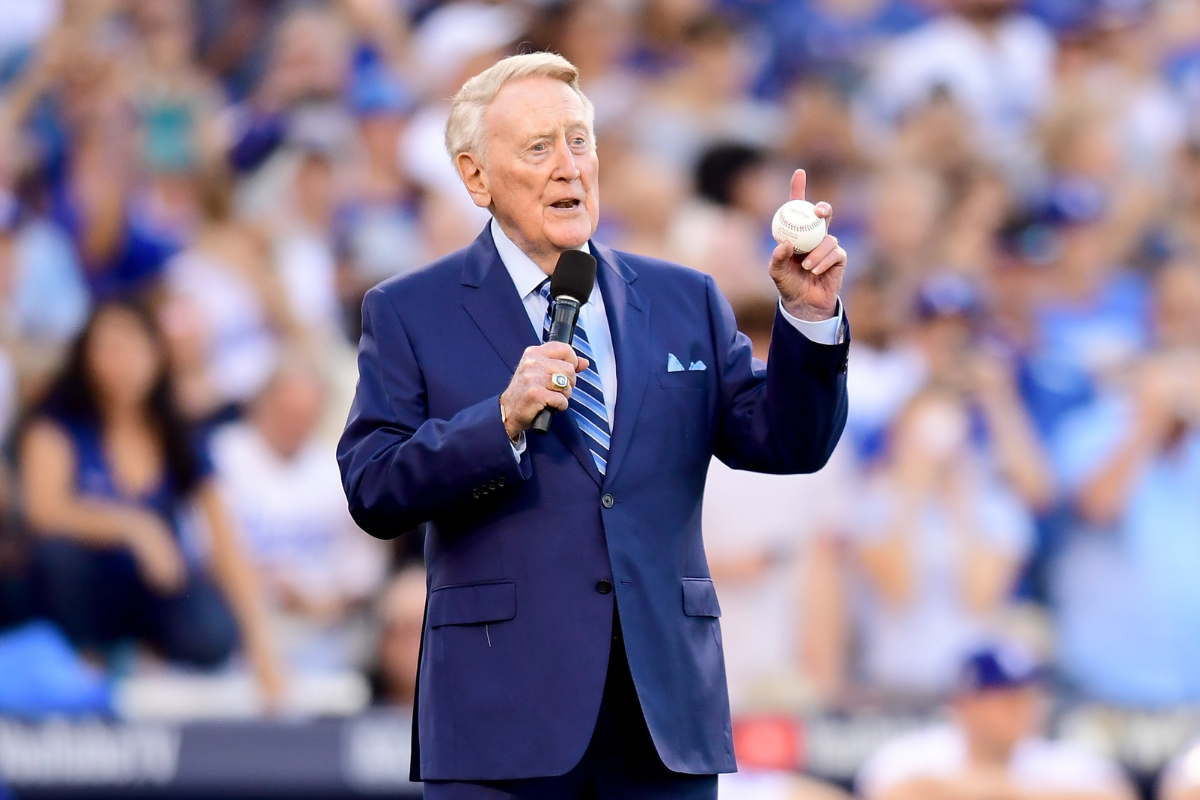 If you love what you do, you’ll never work a day in your life.

That’s the best way to describe how Vin Scully, the voice of the Los Angeles Dodgers, who passed away on August 2, 2022, at the age of 94, lived his life in the broadcast booth.

The voice of the Dodgers, Scully gave us many amazing calls. Kirk Gibson’s home run in the 1988 World Series, Sandy Koufax’s perfect game, Hank Aaron’s 715th home run, and countless Clayton Kershaw thrillers. For anyone outside of California, Vin Scully has other places in our hearts.

I grew up 20 minutes north of Boston, so the only real connection I had to the longtime Dodger announcer’s voice was the odd playoff game. But there was one single moment from 1986 that would echo in my brain for decades.

“So, the winning run is at second base… with two out… 3 and 2 to Mookie Wilson. Little roller up along first… BEHIND THE BAG! IT GETS THROUGH BUCKNER! HERE COMES KNIGHT, AND THE METS WIN IT!”

It’s not the most perfect moment in Boston sports history, but it’s one of the best calls of all time.

“Okay young fella, it’s all yours.” That’s how Red Barber, who would become the Yankees broadcast voice, passed the mic to a 22-year-old Vin Scully for Scully’s first MLB broadcast.

The rest is baseball history.

Some figures in the game of baseball elevate the sport to a new level while also grounding it at the same time. Greg Maddux, is oddly one of those players. After all, who else pitches a complete game shut-out in under 100 pitches anymore? Watching Maddux pitch is like watching DaVinci paint. Each brush stroke has a purpose, and each pitch is a work of art. The same can be true of Vin Scully calling a game, be it a World Series, a Brooklyn Dodgers game or even a random Tuesday night game from Dodger Stadium.

I was lucky enough to spring for MLB.TV ahead of Scully’s final season calling Dodger baseball games. With a job that got me home around 10 p.m. on the East Coast, I would spend my evenings with Vin watching Dodger Baseball.

There’s nothing like watching a game with Vin Scully. No other broadcaster has the stamina, the stories and the know-how to do what we could do. Take this snippet from an early season game between the Dodgers and the San Francisco Giants.

Vin Scully is reading an audiobook and you can’t tell me otherwise. Scully seamless flows between the story about Madison Bumgarner chopping up a snake with an axe, then finding two baby rabbits in it’s stomach, nursing them back to health and then released them back into the wild, with the play-by-play of a Justin Turner walk and  Howie Kendrick single to center field. At no time does Scully” narrative flow stop. He’s in the zone. It’s just him and the microphone. Except it wasn’t, really.

What made Vin Scully the greatest broadcaster in sports is that he cared about the listener. In a world that transitioned to television from radio, Scully never lost sight of the storytelling in broadcasting. If you listen to a terrible sports broadcast, the main issue is the amount of unimportant noise. I don’t mean to call anyone out here, but Alex Rodriguez is the king of this. If you’re just talking to fill the silence, you’re already in the weeds. Vin never allowed that. Each game was a new chapter of the ever-evolving story of baseball. It’s no wonder the Dodgers broadcaster in the Baseball Hall of Fame.

When I asked one of my group chats about the moment that perfectly encapsulated Scully to them, one of them sent the following clip. It’s Vin Scully talking about the passing of Ernie Harwell, the former voice of the Detroit Tigers. In a way that Vin can only do, he says “I really want to salute him, and at the same time I don’t want to get in the way of the ballgame, so let’s see if we can try to do both.”

Scully then begins to weave a tale about Ernie Harwell’s career in baseball. The amount of detail Scully gives is amazing. It’s a story that is more than likely lost to time, but instead, Scully uses it as a tribute to a dear friend of his. In the span of one inning, you get to know everything about Harwell and Scully’s relationship and Harwell’s importance to the Tigers. Why? Because it was important to Vin that you know about Harwell, even if you never had the chance to hear him call a game.

Vin Scully was awarded the Presidential Medal of Freedom by President Obama in 2016. “The game of baseball has a handful of signature sounds — you hear the crack of the bat, you’ve got the crowd singing in the seventh-inning stretch and you’ve got the voice of Vin Scully.”

He’s right. Vin Scully was an ambassador for the game in more ways than you can count and he will be missed immeasurably. But lucky for us, Vin left us with over 50+ years of stories to sift back through, each one told by our favorite storyteller.

You didn’t have to be one of the millions of Dodgers fans out there; Vin was going to make you feel just as valued. Because that’s the kind of baseball figure he was.

MORE: What Happened to the 2 Fans From Hank Aaron’s 715th Home Run?