Barring some form of divine intervention or a miracle minor league prospect, the Washington Nationals are going to finish as the worst team in the National League East. It's not entirely their fault that the 2022 season is a dumpster fire on the deck of the Titanic. No way! The Nationals are rebuilding and that takes time and patience. But man, do these games feel like a slog sometimes.

But every now and then a little baseball magic gets sprinkled into these dull early summer games in Washington. And one young fan was in the right place at the right time to catch a little bit of it. 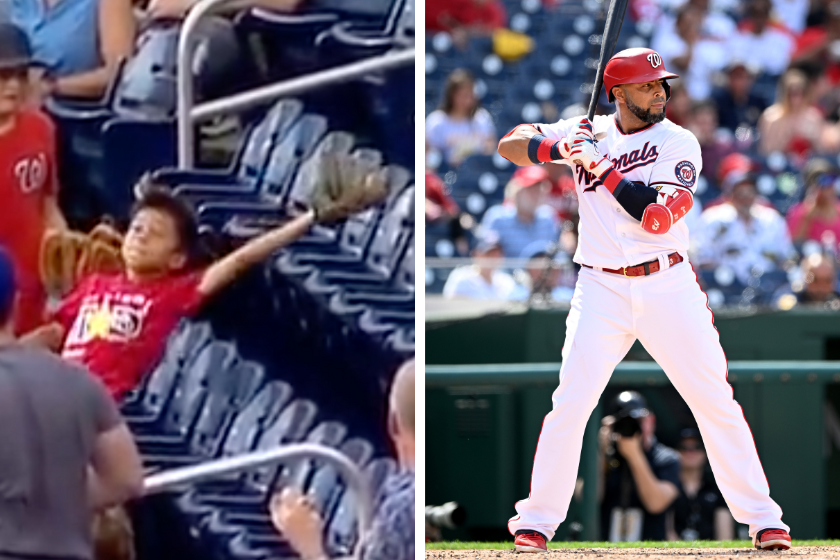 In the bottom of the second inning, against division rival Philadelphia, Washington Nationals DH Nelson Cruz stepped into the box to face Phillies pitcher Zack Wheeler. Cruz has long been known for his loud bat and has made a career out of hard-hit balls that usually find themselves heading towards the outfield bleachers. Cruz had to have been looking for something he could take deep. The Nationals had sent Patrick Corbin to the mound and despite what his contract may tell you, he likes to give up runs. Because of that, it's imperative that the Nats score early and often during his starts.

After swinging through the first pitch, Cruz waited for his chance to barrel up another. Wheeler's next offering dropped away low and outside, but Cruz decided to swing. Instead of the ball heading toward the outfield wall, it sailed into the seats down the right field line directly into the outstretched glove of a young Nationals fan.

"Look at that catch by that young fan down there!" the Nationals broadcaster shouted. "The fans are bringing the gloves tonight!"

Immediately the young fan and his gang of childhood friends all lost their minds. They screamed, jumped and congratulated their friend, who will never ever forget this incredible moment when he made the catch of the year. After all, it's not every day your childhood is made thanks to snagging a foul ball.

On the next pitch, Nelson Cruz hit a double off the wall in right-center, so maybe this kid is a good luck charm for the Nationals. But upon review of the play, they should actually consider signing him to a contract. From the moment the ball leaves the bat, you can tell this kid had his eye on it, and like Juan Soto, the player whose "shirsey" he was was wearing, watched the ball all the way into his glove. I mean, how else can you make a ridiculous foul ball catch?

Heck, the kid even holds the pose for a split second after making the grab like he's Torii Hunter and he just robbed Barry Bonds of a home run.

Sure, the Nationals would go on to lose that game 10-1 after getting the snot kicked out of them by the Phillies, but who cares? We all got to see a kid live out a dream we all shared: catching a ball and hearing an entire stadium cheer.

It just doesn't get better than that.