Conor McGregor showed up to his Floyd Mayweather press conference with a suit that had one subtle, NSFW message 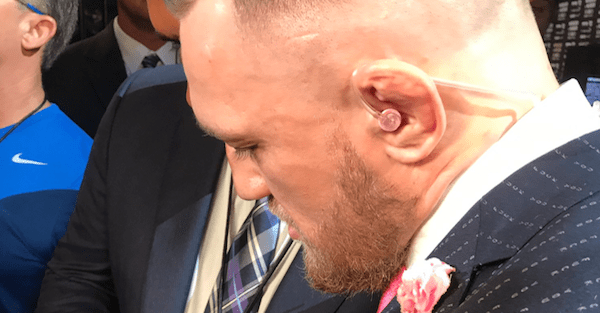 If you look closely, you can see Conor McGregor’s pinstripe suit, which he’s apparently selling versions of according to his press conference hyping an August showdown with Floyd Mayweather, had a very NSFW message on it.

That would be “F**k you,” written over and over again in pinstripes.

McGregor didn’t back down in a supremely entertaining showdown in Los Angeles early Tuesday evening as he prepares for boxing’s unbeaten champion, Mayweather.

Conor McGregor: "he is in a fookin track suit, he can't even afford a suit anymore" 😂😆

According to UFC president Dana White, McGregor got off a plane from Ireland to start his tour hyping up the Mayweather bout and already had a prediction for how the fight will end:

“I will know the man out within four rounds,” White said McGregor told him on Fox Sports 1’s ‘Speak for Yourself’ as the UFC champ got off a plane from Ireland as he starts his tour hyping the Mayweather bout.

What Kavanagh is saying and what McGregor’s videos have shown though, are two entirely different things.

The latest video emerging from the McGregor camp was in response to Mayweather’s training video. To say the least, the results aren’t encouraging.

While the two training regimens are drastically different, the key here is the two fighter’s movement.

Mayweather, as we’ve known, is quick-twitch with rapid movement, blazing fast strikes and he’ll have landed four punches before you know what happens. For McGregor, it’s obvious he’s focusing on power. No training in the world will get him to the same speed as Mayweather, but it’s his movement that is worrisome from these videos. He’s stuck in mud, his head hangs and it’s not fluid.