Conor McGregor confirms what his next next move will be 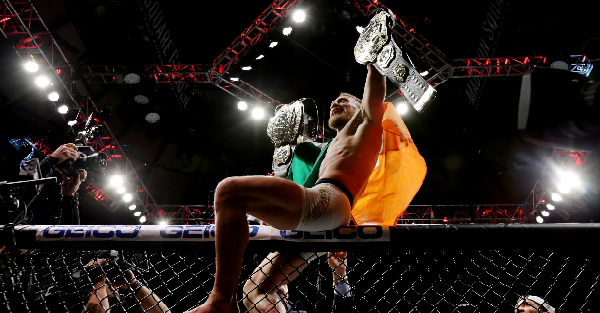 What’s next for Conor McGregor?

After trying his hand at boxing and being rumored to be in talks with WWE for a WrestleMania appearance, it seems that the Notorious one is heading back to his comfort zone — the octagon.

In a video released by TMZ Sports on Saturday, McGregor, who was in New York City with fiancée Dee Devlin, confirmed a return to MMA amid rumors of a potential boxing match against Manny Pacquiao.

“I think a true right is what I want to do next,” McGregor said. “MMA next.”

McGregor also denied rumors of his interest in professional wrestling, responding “”F— the WWE,” when asked by the paparazzi.

According to ESPN, the UFC is currently working on restructuring McGregor’s contract and initially hoped to have the Irish fighter back in the octagon by UFC 219 on Dec. 30 in Las Vegas, but has since shifted its expectations to a potential 2018 return.

McGregor (21-3) has won UFC titles in two weight divisions and is currently the promotion’s Lightweight  Champion.

However, he has not participated in an MMA fight since November 2016, having shifted his focus on a boxing debut, which included a 10th round loss to undefeated champion Floyd Mayweather in August.

The match generated 4.3 million pay-per-view buys and more than $600 million in revenue, according to Showtime.