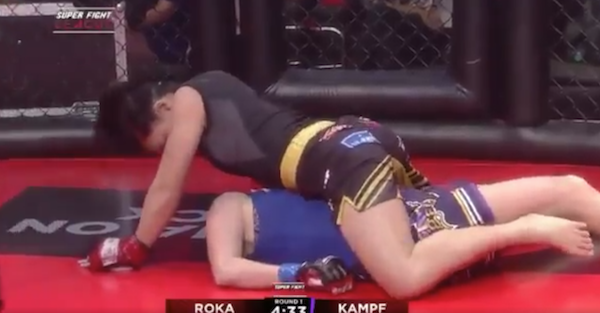 A terrifying moment in the Super Fight League in India occurred when Asa Roka choked out Hannah Kampf, and the referee refused to stop the bout.

Roka took full mount position, locked in a guillotine choke and almost immediately put out Kampf. The horrifying incident continued as Kampf’s body started to shake before her cornerman threw in the towel and rushed in to save his fighter.

She was locked in for at least 15 seconds after her body appeared to go limp, and apparently escaped without any serious damage.

after few min. they showed that she was still alive

The referee was unhappy with an “unfair” criticism of his judgment following the fight. He said he didn’t have enough space to see her face or hand tap on the other side, and that he was in the best position possible. It, of course, is the referee’s responsibility to ensure he/she is in the best position to protect the fighter.