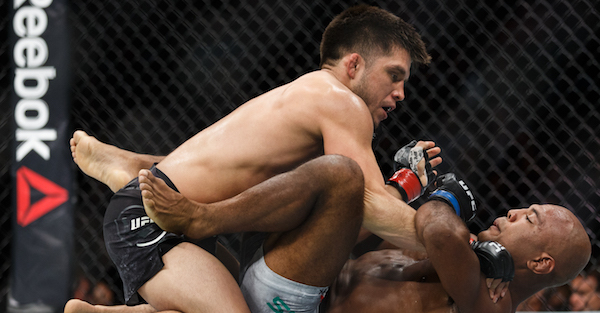 Henry Cejudo’s bout with Sergio Pettis for UFC 218 on Dec. 2 looked to be in doubt after Cejudo suffered burns in a fire, but his manager said the fight is still on.

Cejudo was asleep when the fire alarm went off at about 4 a.m. in northern California. There have been dangerous and deadly wildfires in California, and they spread to where Cejudo was staying. He initially went back to sleep and thought it was a false alarm, but he woke up again surrounded by smoke.

He jumped from the second floor balcony onto the ground, where he landed on fire and burned his foot. He also lost his Olympic gold medal from 2008 and several other personal belongings in the fire, and he managed to escape with only his cell phone.

Cejudo’s manager, Ali Abdelaziz, told MMAjunkie that the burns on Cejudo’s feet weren’t severe, and he will be ready to go for the fight against Pettis.

Hey everybody just want to say thank you for the love and support. Prayers to all the families… https://t.co/ROTpt6qJvu

Thankfully Cejudo didn’t sustain any major injuries in the fire because it certainly could have been much worse.