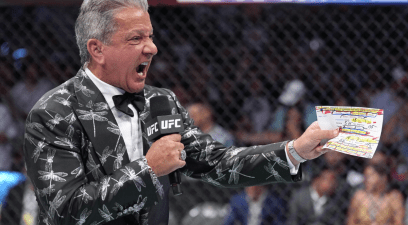 Oezdemir was explosive out of the gate, tagging Cormier with left hooks and uppercuts. The challenger would explode in, and as Cormier ducked the right, he would get popped with the left. About midway through the round, Cormier settled in, found his feet and calmly evaded Oezdemir.

Cormier get a bit confident with some nasty rights and lefts, stumbling his opponent.

He's hurt him!@DC_MMA is laying on the damage in the first! #UFC220 pic.twitter.com/zPmKFNIZbY

Oezdemir would respond with some heavy hands of his own, but Cormier got the takedown, took his back and had his opponent nearly choked out before the buzzer ended Round 1.

Round 2: Cormier vs. Oezdemir

Cormier got the takedown early in Round 2 and took side mount, where he blasted away at Oezdemir’s face. Oezdemir couldn’t escape the side mount, where Cormier pinned his arm to the mat and pounded his face until the referee called the fight.

Cormier came into Saturday night’s fight following a no decision after his knockout loss to Jon Jones was overturned after he tested positive to a banned substance.