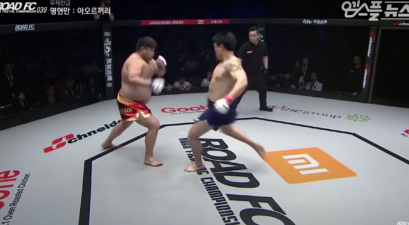 Miocic made UFC history with the longest win streak in the heavyweight division (three wins).

Round 1: Ngannou vs. Miocic

Ngannou came out firing, peppering the champ with nasty overhand shots. The challenger used his 83-inch reach to stay on the outside, but connect on lefts and rights. Miocic found his range and landed back-to-back shots that stumbled Ngannou.

The champ is in great form tonight! #UFC220 pic.twitter.com/CPkya7PWtI

He then took the challenger to the ground and moved into side control. Miocic landed shot after shot, but Ngannou got back to his feet. Clearly gassed, Ngannou had to load up on shots and Miocic took his opportunities at going after the challenger. They traded devastating shots at the end of the round, which concluded with another Miocic takedown.

Ngannou looked like a shell of himself to open the second round, as he was stuck in mud, taking leg kicks and attempting to respond with jabs to the face.

The first half of the second round was spent with Miocic taking aim at Ngannou’s leg and the challenger, for the most part, standing in place. Miocic pushed the challenger back against the cage for another takedown with about two minutes remaining in the round, holding the 6’4″ behemoth in place. Miocic took Ngannou’s back with seconds remaining in the round and locked in the rear naked choke but the buzzer saved him.

Miocic attempted a second single-leg takedown, which Ngannou stuffed. But the champ held him in the clinch against the cage, threw Ngannou to the ground and went right back to bullying the challenger on the ground against the cage. Ngannou was able to pop back up out of the hold, but Miocic maintained clinch until stepping out of it.

With two minutes left in the third round, it was much of the same for the champ, who just picked him apart. Ngannou landed a nasty shot that hurt the champ, but Miocic landed the immediate takedown to recover.

Unable to do much of anything on the ground, Ngannou ate shot after shot.

Miocic landed yet another takedown and just punished Ngannou on the ground. The champ mixed in elbows, knees and punches, spending nearly the entire round on the ground.

He attempted an uppercut, but the champ easily evaded.

Ngannou was on a 10-fight win streak heading into his first title match. Ngannou came into the bout coming off of one of the nastiest knockouts in UFC history, when he ended Alistair Overeem’s evening with a brutal uppercut just one month ago.

Ngannou’s lone loss coming into Saturday night came before he arrived in the UFC by way of decision.

Miocic entered the fight with two consecutive successful title defenses, with wins over Junior Dos Santos and Overeem in May 2017 and September 2016. He won the belt against Fabricio Werdum on May 14, 2016. Miocic hadn’t lost in five fights.

His only losses coming into the evening came at the hands of Junior Dos Santos (decision) and Stefan Struve (TKO).