NASCAR President speaks out after ratings plummet for Daytona 500 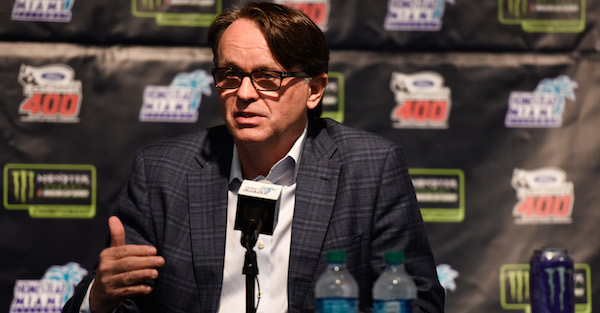 Despite a wildly entertaining race to start the season at the Daytona 500, ratings were down yet again on FOX for NASCAR’s season opener.

Ratings were bad for most of last season, and they reportedly set a new low during last Sunday’s Daytona 500.

Fox's 5.1 overnight rating for Daytona 500 likely would be a new low for the event. Yes a crowded sports weekend, but 2014 race was up against Olympics and had record-setting delay and still got a 5.6 overnight. Fox also down 22% from 2017 race

Related: Despite a thrilling Daytona 500, NASCAR looks like it?s headed for horrible news

Even though ratings weren’t great, NASCAR president Brent Dewar is optimistic about the future of the sport. He told Forbes that the influx of young, talented drivers has given him a positive outlook for the future.

Dewar said that even though NASCAR has lost popular drivers such as Jeff Gordon, Tony Stewart and Dale Earnhardt Jr. in recent years, the sport has been preparing for their departures by grooming the next generation of drivers.

“It’s something we’ve been working on for a long time,” Dewar said. “We never know exactly when a Jeff Gordon’s going to retire, but that happens every decade. The good news is that we’ve been working on our youth initiative for the better part of seven or eight years. So we’ve got an incredible array of drivers coming in.”

Chase Elliott, Ryan Blaney, Kyle Larson and Bubba Wallace are just a few of the young drivers who Dewar is banking on to become the next generation of stars.

While TV ratings were down, the race did sell out ? even though Daytona took out about 50,000 seats a few years ago. Still, Dewar said the live racing experience is very important to attract fans.

“We know from our research and our personal experience, if you attend a race…we have our best chance of making you a fan for life,” Dewar said. “It’s only at the live racing experience that you get the sights, the sounds, the sort of feel that’s truly what NASCAR racing is. And the next time you turn on the TV, you’ll see the layers differently.”

So, even though things temporarily don’t look great for NASCAR, Dewar still believes the future is bright. He’s relying on the young generation of drivers to connect with fans, and given how they’ve performed lately, they might be a safe bet.