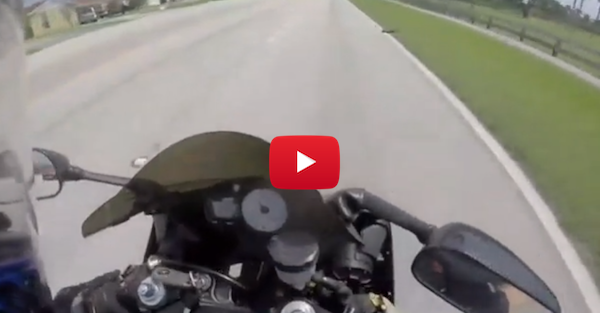 Road rage is dumb and ultimately pointless, but neither of these things prevent it from occurring on a regular basis.

The latest incident, which occurred in Homestead, Fla., on Monday, shows 23-year-old motorcyclist Rone Gonzalez dealing with a road raging man in a red Ford Fusion who was really unhappy about what went down at a light.

RELATED: Two road rage jerks attack a car, but quickly come to regret it and get what they deserve

What happened next was all recorded on a helmet camera.

As WFTX reported, the motorist got angry when Gonzalez ?split two cars who were waiting at a red light.? The driver proceeded to follow Gonzalez at high speeds, weaving in and out of traffic and even forcing the motorcyclist to start driving on the wrong side of the road.

At one point, the driver took a swing at Gonzalez out of his window.

RELATED: A road rage woman put on a show, giving the finger, dancing and grabbing her buddies

?At that point, I just wanted to get out of the situation,? Gonzalez told WSVN.

Notably, Gonzalez attempted to file a police report, but was told by Homestead Police not to bother, as road rage is a common problem.