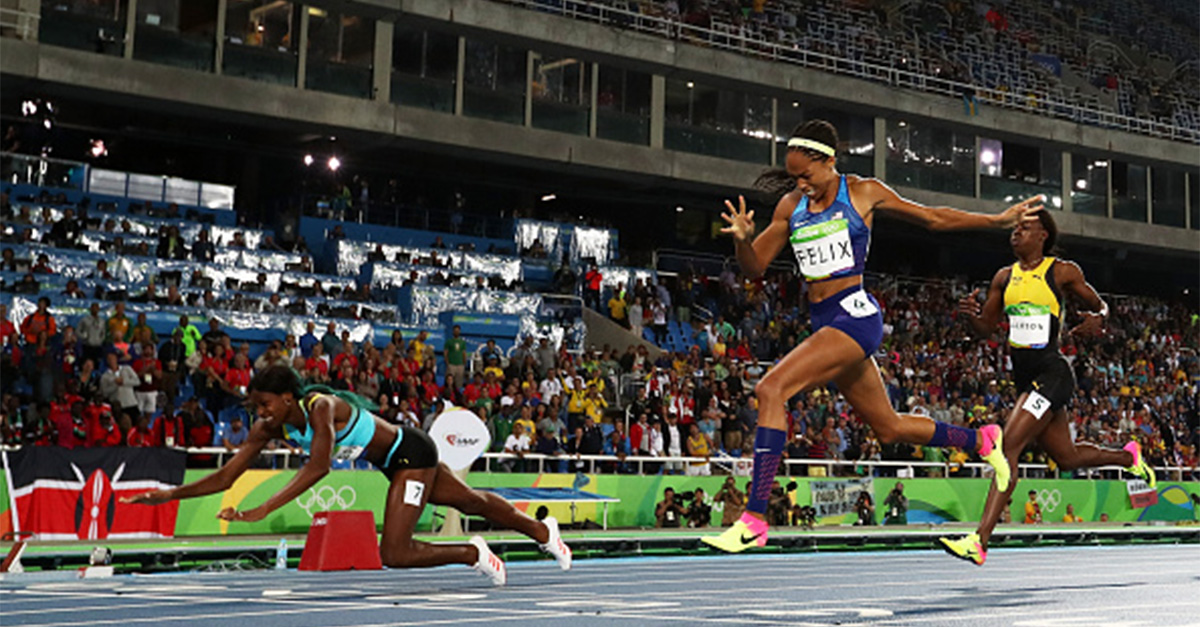 This could be one of the biggest upsets for the U.S. at the Rio Olympics.

On Monday night, the women sprinters raced in the 400 meters. At the very end, Shaunae Miller of the Bahamas dove across the finish line, nabbing the gold medal from the second place winner, Team USA’s Allyson Felix.

Miller started out strong in the race, but she and Felix were neck and neck in the final moments before Miller dove for gold.

Because Miller’s torso crossed the finish line first, she earned a gold medal, and Felix took home the silver.

RELATED: After breaking his leg, this French gymnast had another accident, and it wasn’t his fault

“‘I’ve never done it before,” Miller said. “I have some cuts and bruises, a few burns… it hurts.”

She said that when she hit the ground, she had no idea she actually won the gold.

“What was in my mind was I had to get a gold medal. The next thing I was on the ground. It’s an amazing feeling,” she said.

Fans of the Olympics took to social media with their opinions on Miller’s controversial win.

Allyson Felix when she's standing next to Shaunae Miller on the podium. pic.twitter.com/M2jynMA6ve

Dont care if it's legal, this is the most pathetic way to win a 400m race. You're not sliding into home plate, lady. https://t.co/VjIIwTxhPp

Shaunae Miller's dive was to recover from falling. Sprinters know the quickest way across the line is a well timed lean. Trust me on that.

Allyson Felix got robbed, if you wanna dive do it in the pool

OMG. What a way to win. Shaunae Miller, having given 100%, falls across the line to deny the legendary Allyson Felix pic.twitter.com/eVJKUKUYVv

So all of this leads to a question: Was this a dirty way to win?